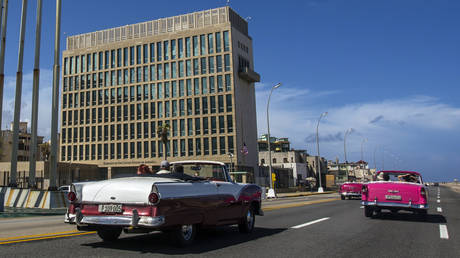 The US government will soon compensate those suffering from the ‘Havana Syndrome’ – a cluster of unexplained symptoms reported by some overseas officials and their relatives – with some slated to receive more than $100,000, several media outlets reported.

The State Department is preparing to offer payments between $100,000 and $200,000 to employees with “qualifying injuries” linked to the syndrome, according to unnamed officials cited by the Associated Press, the Washington Post, NBC and other agencies. Compensation will initially be limited to State Department staffers and their dependents, however, and the specific amounts will be determined by the severity of injuries.

Only about 20% of those reporting Havana Syndrome symptoms worked for the State Department, with most others employed by the Pentagon or the CIA, which have their own policies for such medical issues, according to the AP.

During a classified briefing on Thursday, Deputy CIA Director David Cohen and Assistant FBI Director Alan Kohler updated senators on the unexplained illness, which the Joe Biden administration collectively refers to as “anomalous health incidents.” Other officials with the State Department and CIA also told lawmakers that the government would soon provide a plan for how to compensate Havana Syndrome victims, according to the Post, which was the first to report the six-figure payments.

That plan will be based on the HAVANA Act, legislation signed by President Biden last year which authorized the heads of the State Department and CIA to decide who is eligible for compensation. Though the bill set an April deadline for when officials should propose a system to manage the payments, they have fallen behind and have yet to finalize a plan.

The Havana Syndrome was first reported by diplomats serving at the US Embassy in Havana, Cuba in 2016, with symptoms including headaches, dizziness, tinnitus, and vertigo, as well as trouble with vision, hearing and balance. Some have allegedly suffered long-term brain damage.

In late 2020, a panel at the National Academies of Sciences, Engineering and Medicine concluded that a “directed, pulsed radio frequency (RF) energy” device was the likely culprit behind the illness, prompting media outlets to speculate that Russia or China had unleashed a new, top-secret weapon on American targets. However, other experts have voiced doubt about the ‘directed energy’ hypothesis.

Other theories have also been floated. While the Associated Press released audio in 2017 of a cricket-like sound purported to be a “sonic attack” on US diplomats in Cuba, a pair of experts reviewed the recording and determined the noise didn’t merely sound like insects, but actually was the mating call of the male Indies short-tailed cricket.

Cuban scientists have dismissed claims that secret sonic weapons may be behind the syndrome, stating there was “no scientific evidence of attacks” and that the symptoms were related to mass psychosis among US officials and their relatives.