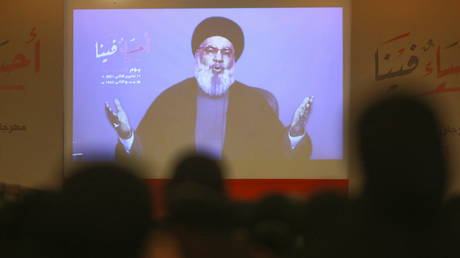 Hezbollah’s secretary-general has accused Riyadh of escalating tensions with Beirut and rejected calls for the resignation of a minister who sparked a diplomatic row over his comments on the Saudi-led intervention in Yemen.

In a live broadcast on Thursday, Sayyed Hassan Nasrallah said events in Yemen, where a Saudi-led coalition is backing the government in an ongoing war against Iran-aligned Houthis, could not be an excuse for Saudi Arabia’s deteriorating relations with Lebanon.

Nasrallah said he would not be drawn into a debate about Saudi Arabia’s row with Lebanon, but accused Riyadh of fabricating the latest diplomatic crisis over the comments of Lebanese Information Minister George Kordahi.

Kordahi, who had criticized the Saudi campaign in Yemen in an interview recorded in the summer, before he became a minister, has been at the center of a row in which the Gulf states withdrew their envoys from Beirut, and Riyadh banned imports from the Levantine nation.

Speaking for the first time on the issue, Nasrallah rejected calls for Kordahi to resign, and said the minister’s comments had been “calm and objective.” He added that there were Americans and Arabs who had spoken more harshly about the Saudi-led campaign in Yemen.

Doubling down on Kordahi’s remarks, Nasrallah said Saudi Arabia’s involvement in Yemen’s war had been a “resounding failure” and a ceasefire was the only way out of the conflict.

Relations between Beirut and Riyadh have worsened over the years, particularly as Hezbollah gained influence in the Mediterranean nation. Nasrallah has claimed that Saudi Arabia – which could flood fuel-starved and beleaguered Lebanon with oil, should it choose to do so – was no longer a friend.