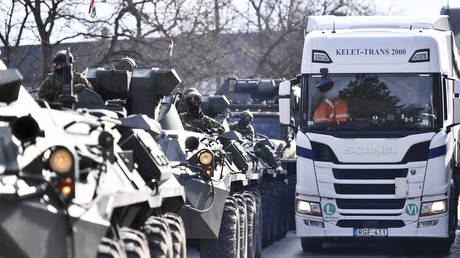 Hungary’s position on deliveries of foreign weapons to Ukraine through its territory has not changed, the foreign ministry in Budapest said on Tuesday evening in a statement. Earlier in the day, authorities in the western Ukrainian city of Lviv claimed the visiting deputy foreign minister had told them otherwise.

This policy has been “clear from the beginning” and “remains unchanged,” Mate added, so “any news portal that circulates a statement to the contrary is publishing incorrect information.”

His statement came on the heels of reports in Ukrainian media – quoting the Lviv city council – that Deputy Foreign Minister Magyar Levente had announced a change to this policy during his visit to the western Ukrainian city.

According to Mayor Andrey Sadovoy, Levente said that Hungary sympathized with Ukraine and would allow the transit of weapons through its territory, admit Ukrainian military personnel and civilians to its hospitals, and give scholarships to 1,000 Ukrainians at Hungarian universities.

Levente’s alleged comments were at odds with the official position of Budapest voiced by his boss, Foreign Minister Peter Szijarto, earlier this month. Szijarto is currently in New York, where he urged the UN Security Council to “do everything possible to [establish a] ceasefire immediately and to start peace negotiations” in Ukraine.

Kiev has repeatedly criticized Budapest for insufficiently supporting the Ukrainian cause. Hungarian Prime Minister Viktor Orban has been a vocal critic of the EU sanctions against Russia, saying last week that they were destroying the bloc’s own economy rather than hurting Moscow. The speaker of the Hungarian parliament touched off a war of words with Kiev last month, when he said that Ukrainian President Vladimir Zelensky had a “mental problem” because he went around threatening the countries he was at the same time begging for help.