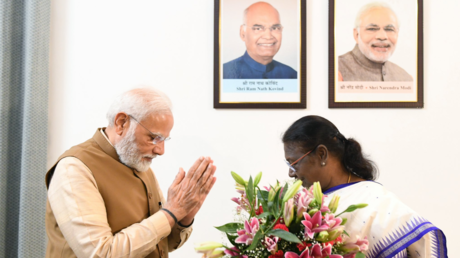 The Indian Parliament and local government officials have voted overwhelmingly in favor of Droupadi Murmu, a 64-year-old teacher-turned-politician, to become the next President of India, election officials announced after the final count on Thursday.

Murmu was nominated by Prime Minister Narendra Modi’s ruling Bharatiya Janata Party (BJP) and received around 64% of the votes cast by some 4,700 state and federal lawmakers on Monday. Her closest rival was a former BJP member, Yashwant Sinha, who quit the party over his disagreements with the Modi government.

A member of the Santal ethnic minority, one of India’s largest tribal groups, Murmu started her career as a school teacher in the eastern state of Odisha before moving on to become a state lawmaker and a governor of the neighboring state of Jharkhand.

“As a tribal woman from remote Mayurbhanj district, I had not thought about becoming the candidate for the top post,” she said after her nomination.

She will be formally sworn in as the president on July 25, replacing the incumbent Ram Nath Kovind, a Hindu nationalist leader who has served as the head of state of the Republic of India since 2017.

While the role of the president in India is widely considered to be ceremonial, the official head of state holds a number of diplomatic, financial, emergency and military powers. The president is bound by the constitution to act on the advice of the prime minister and cabinet, but may exercise a veto power by neither ratifying nor returning a bill passed by the parliament for an indefinite period of time.

“She has emerged as a ray of hope for our citizens, especially the poor, marginalized and the downtrodden,” Modi said in a tweet, after visiting Murmu at her residence in New Delhi to congratulate her in person.

Murmu also received congratulations from India’s Defense Minister Rajnath Singh, Union Home Minister Amit Shah, BJP president JP Nadda, and even her opposition-backed rival Sinha, who tweeted that “India hopes that as the 15th President of the Republic she functions as the custodian of the Constitution without fear or favor.”