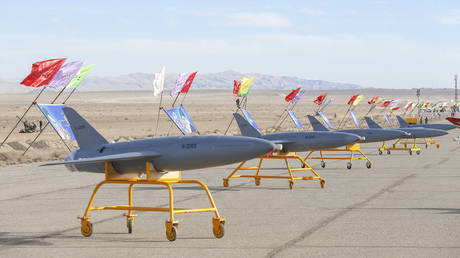 Touting the next generation of this UAV as “peerless,” Heydari noted that Iran had “specially designed this drone to target Haifa and Tel Aviv.” He also said that his country’s military “are waiting for orders to deploy it one day.”

The general went on to describe Arash-2’s features, saying that its unique capabilities enable it to retrieve information multiple times before striking and eliminating its designated target. Heydari added that the drone had already been added to the military’s inventory and promised to demonstrate its potential during future military exercises.

According to media reports, the new drone’s predecessor, Arash-1, has the capability to travel a distance of more than 1,400 kilometers before hitting its target and can evade radar detection. The UAV is said to be 4.5 meters long with its wingspan estimated to be between 3.5 and four meters. The drone’s design also enables it to conserve fuel.

Iran and Israel have long been at odds, with Tehran’s nuclear program being one a major point of contention. Although Iran insists that its intentions are peaceful, Tel Aviv fears that Tehran may eventually acquire nuclear weapons despite the nuclear deal that was signed in 2015 by the US, the UK, France, Germany, Russia, China, the EU, and Iran. Israel is also widely believed to be behind covert attacks on Iran’s nuclear research capabilities and the assassinations of several Tehran’s scientists.