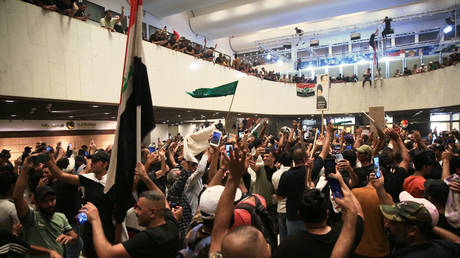 A large crowd of protesters stormed Baghdad’s heavily-guarded Green Zone and broke into the Iraqi parliament again on Saturday. The demonstrators were expressing their dissatisfaction with “the corrupt political class” and a candidate for prime minister whose nomination some ten months following the last federal election prompted a political crisis.

Protesters were seen using ropes to bring down large concrete slabs surrounding the Green Zone, a district housing government buildings and foreign missions, including the US embassy, footage from the scene shows.

Iraqi security forces fired water cannons, tear gas canisters and stun grenades at the crowds yet ultimately failed to repel them, and the protesters poured into the parliament building.

“All the people are with you Sayyid Muqtada,” the crowds were heard chanting, referring to popular Shia cleric Muqtada al-Sadr. The protesters were seen carrying Iraqi flags and portraits of the cleric.

“We came today to remove the corrupt political class and prevent them from holding a parliament session, and to prevent the Framework from forming a government,” a protester told AP, referring to a political alliance known as the Coordination Framework, which recently nominated former governor and minister Mohammed Shia al-Sudani for prime minister.

Unlike the Framework alliance, which is composed of parties closely aligned with Iran, al-Sadr’s movement has long opposed any foreign influence in the country, including from both Iran and the US.

While the cleric has distanced himself from politics, he remains influential and his faction took a large share of Iraq’s 329-seat parliament during federal elections last October. However, the faction exited government formation talks in June, giving the Framework alliance the majority needed to move forward with the selection of a prime minister following some ten months of political uncertainty.

Saturday’s breach was the second such incident within the span of a week. On Wednesday, scores of al-Sadr’s followers stormed the Green Zone and entered the parliament building to protest the same issues of an allegedly “corrupt” political class and the controversial PM candidate.