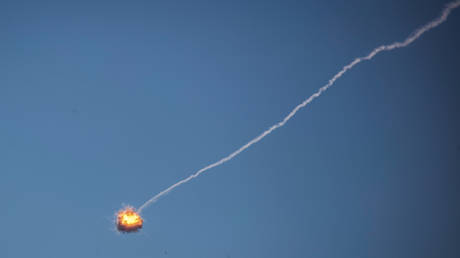 Manufactured by Rafael Advanced Defense Systems, the SPYDER is a short-to-medium range air defense system that can use Python-5 and Derby missiles with ranges of 20 and 50km, respectively. The system can detect aircraft from 70 to 110km away and is designed to locate and destroy drones, cruise missiles, and other aircraft. It is not clear how many of the interceptors were being shipped, or whether they had yet arrived in the UAE.

While the UAE would not be the first nation to get the SPYDER system – Azerbaijan, the Czech Republic, Ethiopia, Georgia, India, Peru, the Philippines, Singapore, and Vietnam all own them – it would be the first in the Middle East apart from Israel. The purchase was reportedly made around the same time the US and Israel were putting together the Middle East Air Defense Alliance, an initiative to synchronize regional air defense systems to combat Iranian drone and missile attacks that West Jerusalem publicly announced in June.

The deal is almost certain to outrage Iran, which has already criticized the nascent defense alliance for exacerbating the problem of regional instability it purports to solve. Tehran denounced Israel as the “main source” of conflict in the area and condemned the UAE, Bahrain, and other majority-Muslim nations for forging alliances with the country while abandoning their co-religionists in Palestine.

The UAE, part of the Saudi-led coalition fighting against the Houthis in Yemen, was targeted by a series of missile and drone strikes in January and February. The Houthis claimed responsibility for many of the attacks, which killed three civilians, injured several construction workers, and damaged an airport terminal. While the UAE already has US-made interceptors, including the Terminal High Altitude Area Defense (THAAD) and Patriot systems, the recent strikes came in at altitudes too low for those systems to catch – a blind spot the newly-acquired equipment is supposed to address.