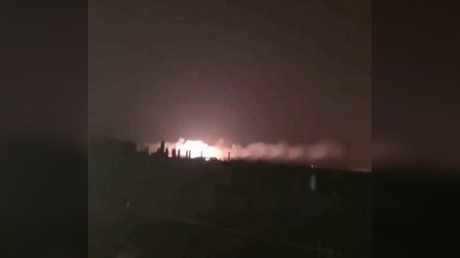 At least two Syrian service members have been killed and three more people injured in an alleged “Israeli air aggression” against a military facility in the central province of Homs, the Syrian Arab News Agency reported on Sunday.

Syria’s air defenses were activated to repel the attack at around 6:20pm local time on Sunday, an unnamed military official told SANA. The missiles reportedly came from the direction of northern Lebanon, and while some of them were intercepted, several projectiles hit the Shayrat military airport near Homs, killing at least two soldiers and inflicting some “material losses.”

The strikes apparently targeted the airbase’s runway, a military source told Reuters, amid reports that the airbase had recently been used by Iranian forces.

Syria: video showing blasts inside Shayrat Airbase, SE. of Homs, after it was bombed tonight by Israel. Powerful explosions seen despite the distance. pic.twitter.com/hFXSfjU2fe

The Israel Defense Forces (IDF) neither confirmed nor denied the latest raid, in line with its long-standing policy to not comment on operations conducted outside the country.

On the rare occasions that Israel has acknowledged the attacks, the government said it was exercising preemptive self-defense against the Iranian presence in Syria.

Israeli warplanes have repeatedly bombed targets inside Syria over the country’s decade-long struggle against jihadist rebels, with Former Prime Minister Benjamin Netanyahu once acknowledging “hundreds” of strikes over the years. On Sunday, Netanyahu was officially tasked with forming a new  right-wing coalition government, paving the way for his political comeback.