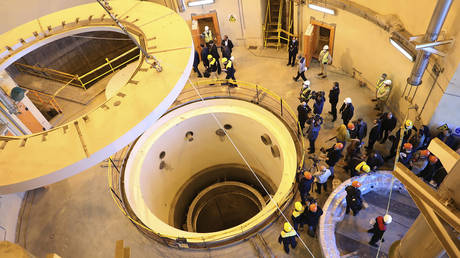 Israel will not feel constrained by a possible renewal of the nuclear deal with Iran and intends to continue targeting “state terrorism” of the Tehran “regime,” Mossad Director David Barnea said in a speech on Monday.

“We will not take part in this charade. We will not close our eyes to the proven truth,” Barnea said at the Reichman University in Herzliya, in his first public address since he took over the reins at Mossad last year.

“The deal is based on Iranian lies. Iran has sought to build a nuclear weapon that endangers Israel’s existence. The deal will easily help them reach this goal under international legitimization,” he said, adding that “even if a deal is signed, it will not provide immunity from Mossad operations.”

Barnea accused Tehran of masterminding “planned, systematic, and strategic terror” perpetrated by the intelligence agencies and the Islamic Revolutionary Guard Corps (IRGC), which he said has only become worse in recent months. Mossad, he said, has thwarted “dozens” of planned Iranian attacks against Israelis and Jews abroad, in places like Cyprus, Colombia and Turkey. Barnea also cited the recent US allegations that Iran plotted the assassination of John Bolton and Mike Pompeo, two former officials in the Trump administration.

Attacks against Israel or Israelis, directly or indirectly by proxies, “will be met with a painful response against those responsible, on Iranian soil. We will not pursue the proxies, but the ones who armed them and gave the orders, and this will happen in Iran,” the Mossad director warned Tehran.

Barnea spoke after returning from Washington, where he visited last week to voice objections against renewing the nuclear deal with Tehran.

Israeli leaders have claimed for over two decades that Iran is months away from developing a nuclear bomb, though Tehran insists its intentions are peaceful. The original nuclear deal, signed in 2015 by the US, the UK, France, Germany, Russia, China, and the EU, as well as Iran, was supposed to repeal many UN sanctions against the Islamic Republic while limiting its ability to enrich uranium far below the level needed to build an atomic bomb. The US pulled out under then-president Donald Trump in 2018, declaring the treaty fundamentally flawed and slapping further sanctions on Tehran.

A draft of the new deal leaked last month shows a four-stage process starting with an immediate lifting of sanctions on 17 Iranian banks and 150 other economic entities. Iran would also immediately begin scaling back its nuclear activities, which it increased beyond levels permitted by the 2015 deal when none of the other parties held to their terms.