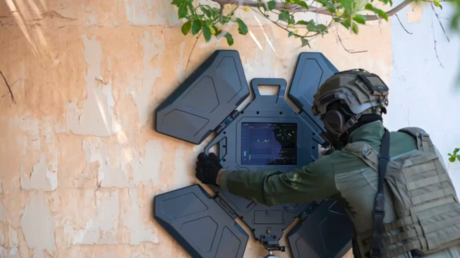 An Israeli tech company has introduced a new portable radar system that can detect living beings through solid walls and uses AI to differentiate between people and animals. The makers of Xaver 1000 call it “essential” and a “game changer” for anything from search and rescue to special forces engaging in urban combat.

The new device boasts “an AI-based tracking of live target patterns,” according to its makers, Camero-Tech. The Israeli military contractor, based in Kfar Netter near Netanya, says the Xaver 1000 provides “an unprecedented resolution of body parts and position: sitting, standing, lying down, and the height of live objects” and can distinguish between adults, children and animals.

The Xaver “determines the most suitable approach to ensure successful life-saving missions in a variety of operational scenarios, such as hostage rescue situations,” Beeri told Israel Defense.

Xaver 1000 can “see” through most common building materials, according to Camero-Tech. It is portable and can be operated by a single user, both directly and remotely via wi-fi. One of the features is an integrated touch-screen that can render a 3D display of both living people and objects, both when placed against a wall or from a short distance away, according to the company. Data can be recorded and played back for analysis, debriefing, and training purposes.

Camero-Tech presented the Xaver at the Eurosatory 2022 exhibition of military technology, held earlier this month in Paris, France.

The new device combines many of the features of other products in the Xaver series, from the handheld “presence of life detector” to the LR80 remote sensor.