Italy may soon be unable to arm Ukraine – foreign minister 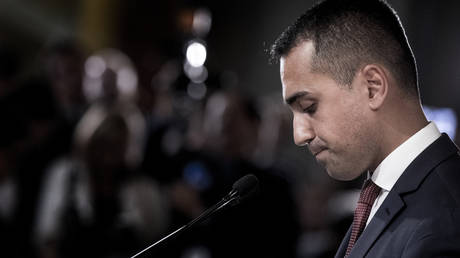 Political turmoil in Italy could soon see Rome unable to continue supporting Ukraine with weapons deliveries, the country’s foreign minister has warned. According to Luigi Di Maio, this would be the case should the incumbent government not survive a no-confidence vote next week.

In a phone interview with US media outlet Politico on Friday, Di Maio said that those in Italy who want the collapse of Prime Minister Mario Draghi’s government are playing into the hands of the Kremlin.

“The Russians are right now celebrating having made another Western government fall,” the minister argued.

Di Maio went on to express doubt as to whether Italy will be able to keep supplying arms to Ukraine under these circumstances, adding that “it is one of the many serious problems.”

The official explained that, should the government collapse, it would still remain in power for some time in a caretaker capacity. However, in this case, its powers would be reduced, meaning, among other things, that the government wouldn’t be able to continue weapons deliveries to Ukraine.

“If the government falls on Wednesday, we won’t have the power to sign any new energy contracts and this is serious because we are headed into winter,” the minister added.

According to Di Maio, Italy could also end up without a 2023 budget as the document is normally passed by parliament between July and December. Should there be elections in September or October, however, it could take months before a new coalition government is formed, meaning that the budget would be postponed, the minister explained. He added that it took 100 days to form a government the last time.

On Thursday, the Five Star Movement, which is part of Prime Minister Draghi’s coalition government, boycotted a no-confidence vote, with the premier offering to resign in response. However, Italy’s President Sergio Mattarella refused to accept his resignation, with Draghi’s government facing another no-confidence vote on Wednesday.

Di Maio, who had been one of the Five Star Movement’s leaders but left the party last month over a row concerning arms deliveries to Ukraine, laid into his former allies, accusing them of “helping Putin’s propaganda and autocracy over democracy.”

The foreign minister hailed Prime Minister Draghi as one of the staunchest opponents of the Kremlin in the West, who advocated strong sanctions and the freezing of Russia’s foreign reserves following the start of Russia’s offensive against Ukraine in late February.

The Five Star Movement has attempted to weaken the incumbent Italian government on several occasions over the past few months already, the official claimed. He specifically mentioned the party’s opposition to an increase in Italy’s defense spending to meet the NATO target, as well as a resolution in parliament against NATO and Italy’s support for Ukraine.

Di Maio, however, said at the same time that a lot of other political forces and labor unions in Italy understood the importance of having a fully functioning government, meaning that Draghi hopefully could stay in power after all.