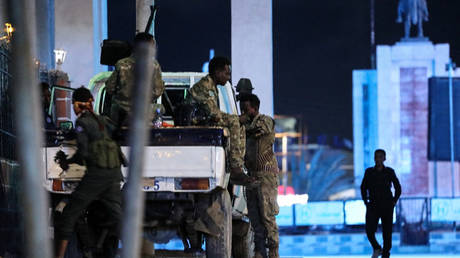 An attack on a popular hotel in the Somali capital has left several people dead, according to police and witnesses, with a rebel militia group detonating explosives outside before gunmen stormed the building. A gun battle with security forces is ongoing as of Saturday morning.

The assault on the upscale Hayat hotel in Mogadishu kicked off late on Friday and was soon claimed by al-Shabaab, an al-Qaeda linked jihadist group based in Somalia. After blasting their way into the building, armed fighters then ran inside and have continued a shootout with police since.

“A huge blast went off a few minutes before the gunmen forced their way into the hotel,” security official Abdukadir Hassan told AFP, adding that “the security forces are now engaging with the enemy who are holed up inside the building.”

While many details about the attack remain unclear, police and eyewitnesses cited by the Associated Press said at least 10 civilians had been killed so far. No victims have yet been identified by the government.

Another Somalia official cited by AFP, Mohamed Abdikadir, noted that police had “rescued dozens of civilians including children who were trapped in the building.” It is so far unclear how many people were inside the hotel at the time of the attack, and how many remain inside.

Shots could still be heard around the hotel early on Saturday, with security forces saying they are attempting to contain the last remaining gunmen, whose exact numbers are unknown.

Formed in 2006 in the wake of years of civil war in Somalia, al-Shabaab has grown increasingly radical over the years, and in 2012 pledged an oath of allegiance to the infamous al-Qaeda terrorist cell. The United States has repeatedly targeted the group with airstrikes, and has cited the faction as a major reason for America’s on-off troop presence in the country.

Though former President Donald Trump previously ordered all US soldiers to leave Somalia, he did not completely end operations there, with troops continuing to “commute” to the country for missions. President Joe Biden recently reversed that decision and redeployed several hundred soldiers, however, and the Pentagon has declared the need for a “persistent US military presence in Somalia to enable a more effective fight against al-Shabaab.” The US military has also continued air operations and claimed to have killed some 17 Shabaab fighters in multiple strikes this month alone.

Previous Posts How Post-Covid Loss Of Smell Or Taste Affects Cognition? Study Finds
Next Posts Putin and Xi may meet sooner than expected