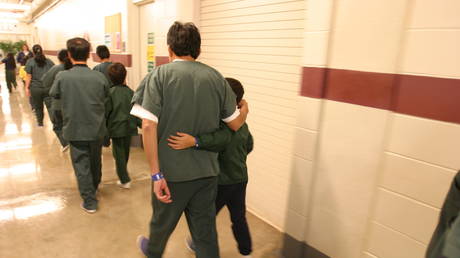 Texas Federal Judge Drew Tipton on Friday struck down the immigration enforcement restrictions adopted by the administration of US President Joe Biden, arguing the attempt to limit the actions of the Immigration and Customs Enforcement (ICE) agency constituted a violation of federal immigration law.

The administration’s restrictions went beyond mere guidance offered to ICE agents, Judge Tipton wrote, instead “provid[ing] a new basis on which aliens may avoid being subject to the enforcement of immigration law,” and therefore required the normal notice-and-comment period offered under the Administrative Procedures Act (APA).

The ruling was a response to a lawsuit filed by the states of Texas and Louisiana, which sued the Biden administration last April for its alleged refusal to enforce immigration law. At issue was a policy change announced two months before that required the ICE to prioritize the arrest and deportation of only illegals with recent convictions for aggravated felonies or who were known terrorists or gang members. It effectively prevented the agency from deporting 90% of the illegal aliens they would otherwise have sent home.

Texas Attorney General Ken Paxton accused the president’s cabinet of “demonstrating a blatant disregard for Texans’ and Americans’ safety,” and the suit asked the judge to rule that the Biden administration’s new limits on ICE activities constituted a violation of both the APA and federal immigration law.

While Department of Homeland Security Secretary Alejandro Mayorkas argued that simply being in the US without authorization “should not alone be the basis” for deportation or arrest, and the Biden administration’s lawyers defended its policy to focus only on so-called “aggravated felons” as a reasonable use of prosecutorial discretion, Judge Tipton argued the administration was by law restricted to altering immigration law within the bounds set by Congress.

Paxton hailed the ruling as a “massive defeat for the Biden administration,” accusing the president’s cabinet of trying to “throw out immigration law.”

The ruling will not officially be implemented until next Friday in order to give the Biden administration time to appeal. A DHS spokesperson told Fox News the agency is “assessing the court order and considering next steps” regarding whether to challenge the ruling.

The Biden administration’s efforts to increase the permeability of the US’ southern border have met with strong legal resistance from border states and certain members of the opposition Republican Party. The Democrats’ attempt to end Title 42, a public health rule used under the Trump administration to keep out potentially Covid-19-infected migrants, was blocked by a federal judge in Louisiana, while other Trump-era border rules have also been ordered to be reinstated.

From Biden’s inauguration in January 2021 until this past April, over three-quarters of a million illegal immigrants entered the US, a figure so high it would take the DHS 14.5 years under the current rate of deportation to send them all back to their countries of origin. Nearly 123,000 unaccompanied minors were also caught and resettled around the US during 2021, and neither figure includes the hundreds of thousands of migrants who are never apprehended by Customs and Border Patrol or ICE.