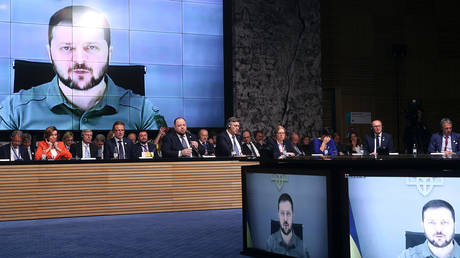 The Ukrainian leader will take part in the summit, but the there’s no final decision on the format, his spokesman claims

“Vladimir Zelensky would surely participate in the G20, in some format,” Nikiforov told outlet Suspilne Novini on Tuesday.

Later in the interview, he clarified that the Ukrainian leader would likely join the high-profile event, to be held on the island of Bali on November 15 and 16.

Zelensky has attended many international gatherings in the online format since the start of the Russian military operation in Ukraine, including the G7 summit in Germany in June.

Ukraine isn’t part of the club of the world’s top economies, but Zelensky had been invited to Bali by the government of Indonesia, which currently presides over the G20.

Last week, the Ukrainian president warned that he’ll skip the G20 if it’s attended by his Russian counterpart Vladimir Putin. At the same time, Zelensky said that Kiev was continuing with preparations for the summit.

Russia hasn’t yet officially announced if Putin will be coming to Bali in person or not. In late October, the Russian president said that the Kremlin “will think about how to do it. Russia will surely be represented there at the highest level. Maybe I’ll go, after all. I’m deciding on it right now.”

Russia’s Vedomosti newspaper reported on Tuesday that it was unlikely that Putin will attend the G20. The paper’s diplomatic source said there has been no active preparations for the president’s trip to Indonesia. The country is going to be represented by foreign minister Sergey Lavrov at the event, according to the outlet.

Indonesia’s President Joko Widodo has also told the Financial Times on Monday that he had a “strong impression” that Putin will be skipping the gathering.