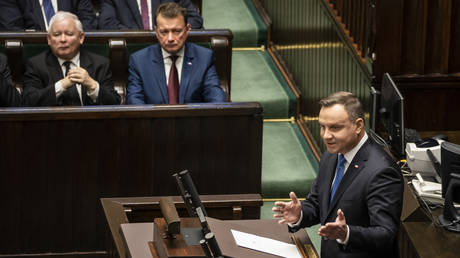 Politicians in Warsaw undermine the reputation of their own country and complicate relations with others, Dmitry Peskov says

Poland’s demands for reparations over World War II from Germany and Russia are “unhealthy political extremism,” Kremlin Press Secretary Dmitry Peskov has said. He noted that Moscow may itself look for historical reasons to claim compensation from Warsaw.

Last week, Poland’s parliament voted to seek €1.3 trillion in reparations from Germany for damages incurred during the Nazi occupation of the country. After that, Polish President Andrzej Duda suggested that Russia, which is a successor state to the USSR, should also pay up. The Soviet Army, together with local troops, completed the liberation of Poland from the Nazis in 1945.

“Unfortunately, some politicians in Warsaw are resorting to a sort of unhealthy political extremism,” Peskov said when addressing the issue on Monday.

The calls for reparations “undermine the reputation of their country and significantly complicate its contacts, and not only with Russia – it’s hard to complicate things there any further – but also with their allies, I mean the situation with Germany,” he pointed out.

The Kremlin press secretary made it clear that the Russian authorities weren’t taking the Polish demands seriously.

One can only joke about such “frenzied Russophobia,” Peskov said, suggesting that “our historians should travel to the 16th century. Maybe we’ll find something to call the Poles out for too.”

He was likely referring to the Time of Troubles or the Great Smuta in Russian history. This was a period between 1598 and 1613, during which the country switched its rulers six times and was briefly occupied by the Polish-Lithuanian Commonwealth.

The chair of Russia’s State Duma, Vyacheslav Volodin, responded more harshly to Duda’s calls for reparations on Friday, calling for a criminal case to be launched against the Polish leader. “Today, Poland exists as a state only thanks to our country,” Volodin said on Friday.

Warsaw has been one of the strongest backers of Ukraine since the start of its conflict with Russia in late February. It has provided Kiev with weapons, including tanks, taken in some 1.5 million refugees, and actively called on the EU to slap even tougher sanctions on Moscow.

Previous Posts NATO's bombing of Yugoslavia: How the illegal US-led attack on the Balkan state changed the course of European history
Next Posts Iranian police respond to woman’s death in custody