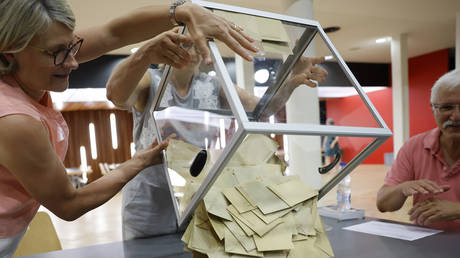 The loss of a comfortable parliamentary majority by French President Emmanuel Macron’s coalition sets a grave challenge to the country, Prime Minister Elisabeth Borne has said.

“This unprecedented situation poses a risk for our country, given what we are dealing with nationally and internationally. But it is a vote, and we must respect it,” Borne said on Sunday night, after the results of the second round of the parliamentary election were finalized.

Macron’s Ensemble! (Together) coalition failed to secure an absolute majority in the National Assembly, the lower house of the country’s parliament. It will need help from other parties in order to pass legislation.

The PM said she would work on building “a majority of action” because there was “no alternative.”

“We will open dialogue with the French … everywhere,” Borne said.

French daily Le Parisien quoted a government source as saying that Borne wanted to use the election to jump-start her career, “but now it will be more complicated.”

Jean-Luc Melenchon, whose left-wing NUPES (New Ecologic and Social People’s Union) bloc is now the second-largest force in parliament, thanked his supporters, tweeting: “All opportunities are in your hands.”

“Not for a moment will we give up the ambition to govern and bring the country to a new horizon,” he added.

Melenchon hailed the election results as “a collapse of the presidential party.”

The upset was dealt to Macron after he was re-elected in April, comfortably beating Marine Le Pen from the conservative National Rally (RN) in a runoff.

French daily Le Monde wrote that the new configuration in parliament “seals, above all else, the failure of the president,” and would make Macron’s second five-year term much more difficult than the first one. The paper argued that “the feeling of betrayal” discouraged Macron’s base from supporting him for the sake of blocking RN candidates.

Le Figaro highlighted the “historic achievement” of RN, which won 89 seats, becoming the third-largest party in parliament. For the first time in 40 years, the party can now form its own parliamentary group.

Le Pen argued that the party was “entitled” to have members appointed as vice president of the National Assembly and the president of the parliamentary finance committee. She promised to “block all harmful reforms,” including Macron’s plan to raise the retirement age to 65.

Commenting on the election on his Telegram channel, Russian Senator Konstantin Kosachev described the defeat of Macron’s bloc as the “disappointed and angry reaction of a society to the disturbances in European economy and social life over the course of the last two years.”

Kosachev, who is the deputy speaker of the upper house of Russia’s parliament, said the EU has been going through “a manmade and pseudo-liberal crisis.”