Major migrant caravan sets off toward US – media 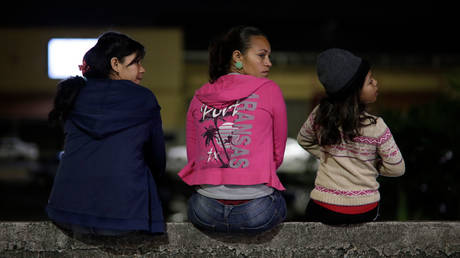 A group estimated by media outlets at up to 15,000, possibly the largest on record, has begun its journey from Mexico

A caravan of as many as 15,000 migrants, many from Venezuela and Cuba, has begun its march from southern Mexico to the US border, fleeing poverty and violence as President Joe Biden hosts leaders from across the continent at this week’s Summit of the Americas in Los Angeles.

The migrants set off on Monday from Tapachula, a city in the southeast corner of Mexico’s Chiapas state, a few miles from the Guatemalan border, according to media reports. They’ll have to travel more than 3,000 miles to reach the US.

The caravan could be the largest in history and comes at a time when US President Joe Biden is facing criticism over an immigration crisis. A record flow of illegal aliens arrived at the US-Mexico border in April, averaging nearly 8,000 a day. More than two million migrants were encountered by Border Patrol officers last year, and traffic could surge to 18,000 a day when so-called Title 42 Covid-19 restrictions are lifted, Biden’s administration has estimated.

Caravan organizer Luis Garcia Villagran told Reuters that the start of the march was planned to coincide with this week’s Summit of the Americas. “We strongly urge those who attend the summit … to look at what is happening, and what could happen even more often in Mexico, if something is not done soon.”

The summit, which began on Monday, will address such issues as immigration, climate change, and the Covid-19 pandemic. Biden is scheduled to arrive on Wednesday and reportedly may announce a new regional migration pact this week.

Ironically, the US declined to invite Venezuela, Cuba, and Nicaragua to the summit, the three countries believed to have the largest numbers of migrants in the caravan. In response to the snubs, Mexican President Andres Manuel Lopez Obrador is boycotting the summit.

“I believe in the need to change the policy … of exclusion, of the desire to dominate for no reason and not respect the sovereignty of countries, the independence of each country, and it will not be a Summit of the Americas without the participation of all countries in the Americas,” Lopez Obrador told reporters on Monday.