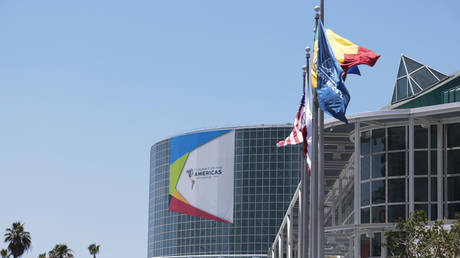 Venezuelan President Nicolas Maduro has praised his Mexican counterpart Andres Manuel Lopez Obrador for skipping the ongoing US-led ‘Summit of the Americas’. Maduro, who was not invited to the event in Los Angeles, has suggested a more inclusive gathering with US President Joe Biden “as a guest”.

On Monday, Lopez Obrador confirmed he would not attend the event after Washington refused to host the left-leaning leaders of Nicaragua, Venezuela and Cuba.

During a parliament address later in the day, Maduro said “we express our admiration for the clarity and courage of the President of Mexico”.

Maduro also supported Lopez Obrador’s calls to “leave the world of sanctions, blockades, exclusions and discrimination coming from the US.”

“Unfortunately, it is the US government itself that has punctured the so-called summit, which has already made that summit fail,” the Venezuelan leader said. In his view, “it has no agenda, it has no theme, it has no decision points, it has nothing to link that meeting to the problems and issues of interest and priority of the people of the Americas.”

Maduro also stated that despite his country not being present, Venezuela’s interests would still be represented by Argentine President Alberto Fernandez who will bring the voices of Latin America and the Caribbean to the meeting.

“President Fernandez is a brave man, who defends what he believes in; and he is against exclusion,” added Maduro.

The Venezuelan leader then offered to host “sooner rather than later” a meeting of the Community of Latin American and Caribbean States (CELAC).

Mexico’s president said that he would be sending Foreign Secretary Marcelo Ebrard to the summit in Los Angeles, which started Monday and is set to run through June 10. The announcement comes despite an earlier warning that he would pull out of the gathering unless all countries in the region were permitted to attend.