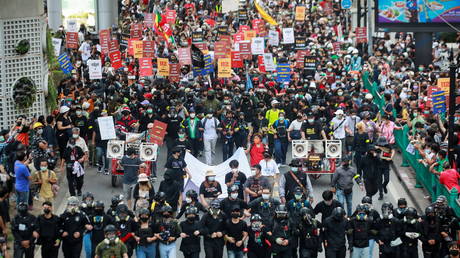 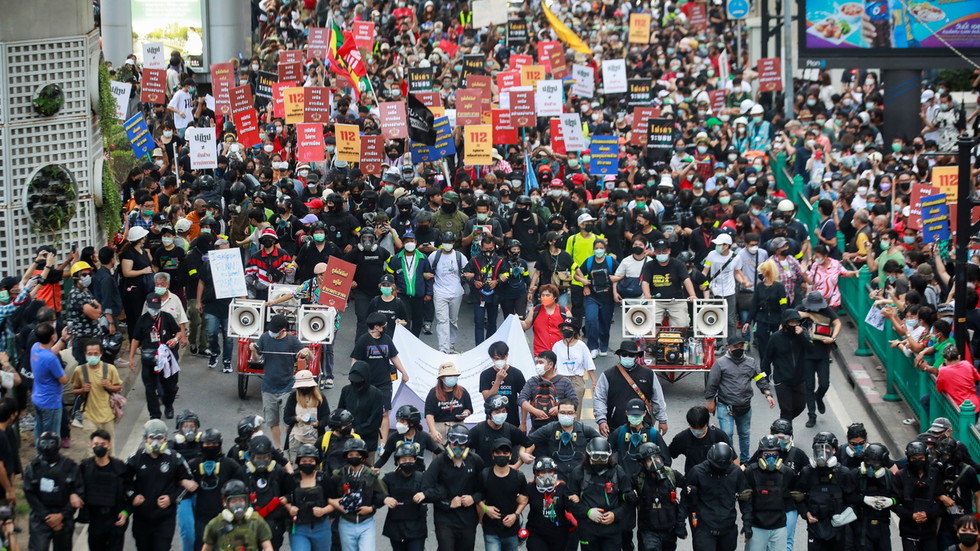 At least three people have been injured as demonstrators marched through the Thai capital, Bangkok, on Sunday to protest a recent Constitutional Court ruling branding calls to reform the monarchy unconstitutional.

Protesters flooded the streets in the city center carrying banners and placards that read: “No absolute monarchy” and “Reform is not abolition”. People took part in the massive march to protest what they described as a return to absolute monarchy under King Maha Vajiralongkorn.

Some activists were seen spray-painting graffiti on the roads they were marching through. “This country belongs to the people,” one message read. The protest was sparked by the Thai Constitutional Court’s Wednesday decision de facto outlawing all calls to reform the institution of the monarchy.

It stated that calls for reform issued by three protest leaders in August 2020 were unconstitutional and tantamount to an attempt to overthrow the monarchy altogether. “We are not overthrowing this country.

The reform is to make it better,” one of the protest leaders, Thatchapong Kaedam, said on Sunday. “The Constitutional Court is seizing power from the people.”

Protesters also burned nine effigies of the Constitutional Court judges to express their dissatisfaction with the ruling.

The crowds initially planned to march towards the Democracy Monument in the city center but were blocked by the police. They then moved to the German Embassy where they read a statement drawing attention to the king’s frequent stays in the European country.

It said the king’s “increased powers… are pulling Thailand away from democracy and back to absolute monarchy,” and that the demonstrators want to see the nation “ruled by a system in which everyone is equal.”

Police have been deployed to the city en masse in response to the protest. There have been several brief standoffs between law enforcement and the rally participants. At one point, the crowd broke through a police cordon. Another particularly tense moment saw a small, tightly packed police formation retreating from the crowd with several officers allegedly shooting rubber bullets point-blank at the crowd.

A photo shared on social media showed at least one person with what appeared to be an abdomen injury inflicted by a rubber bullet. Police confirmed that at least three people were injured on Sunday, adding that the causes of the injuries were unclear. The officials also said explosions were heard as the crowd was heading towards the German Embassy.

The demand to reform the monarchy is considered radical and controversial in Thailand, as the institution is considered sacrosanct. The nation also has lese-majeste law, in which anyone found guilty of defaming the monarchy could face up to 15 years in jail. At least 157 people have been charged under this law since last year, when Thailand also saw massive protests, according to the Thai Lawyers for Human Rights group.