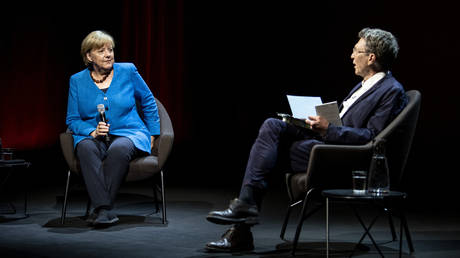 Former German chancellor Angela Merkel has once again defended her 2008 call to impede Ukraine from joining NATO, insisting that Moscow would have perceived the move as an open “declaration of war.” Speaking from a Berlin theater stage on Tuesday, she also claimed that a failed 2014 German-brokered peace initiative “bought” Kiev time to prepare politically and militarily to confront Russia.

“I don’t have to blame myself for not trying hard enough,” Merkel said in her first major public appearance since stepping down last year. “Diplomacy isn’t wrong just because it hasn’t worked.”

In 2008, the US-led military bloc issued the Bucharest Summit Declaration, agreeing that both Georgia and Ukraine would eventually become members. However, they didn’t actually put plans in motion due to objections by France and Germany.

“My assessment is quite clear: If the Membership Action Plan had come back then, [the Ukraine conflict] would have happened even faster,” Merkel said, adding that “at the time, Ukraine was a country ruled by oligarchs, and so there you can’t just say ‘OK tomorrow we’ll take them into NATO’.”

Following the 2014 coup in Kiev, Merkel’s government, alongside France, became a guarantor of the Minsk Agreements, signed to regularize the status of the Donetsk and Lugansk regions within the Ukrainian state. In 2016, the so-called Steinmeier Formula was signed, under which the breakaway provinces were supposed to hold elections under Ukrainian laws and OSCE oversight, whereupon they would receive special self-governing status and return control of their borders to Kiev.

“This agreement has been incorporated into a UN Security Council resolution, so it has the character of international law,” Merkel said.

It calmed down the matter and bought Ukraine a lot of time, seven years, to develop into the country that it has become now.

Citing Kiev’s refusal to implement the terms of the peace initiative, Moscow eventually recognized Donetsk and Lugansk as independent states, and sent troops into Ukraine on February 24. Russia has now demanded that Ukraine officially declare itself a neutral country that will never join the NATO military bloc. Kiev insists the Russian offensive was completely unprovoked and has denied claims it was planning to retake the two republics by force.

Merkel has condemned the attack as “a great mistake on Russia’s behalf” and a “brutal assault in defiance of international law.” She accused Russian President Vladimir Putin of seeking to “destroy Europe,” insisting she was never naive in her interactions with Putin and claiming that strength was “the only language” he understands.

“It’s very important for the European Union to stick together now,” Merkel added, though she nonetheless stressed the need to “find a way to co-exist despite all our differences,” because countries like Russia or China are too big to isolate or “ignore.”