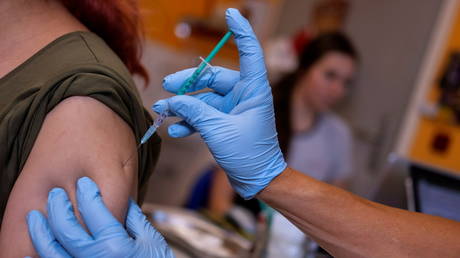 Rolling up your sleeves for a Covid jab isn’t only a person’s right, it’s their “duty” to society, outgoing German Chancellor Angela Merkel said, as her nation sees record increases in virus cases despite high vaccination rates.

“You have the right to get vaccinated,” Merkel told an Asia-Pacific business forum on Friday, adding that “to a certain extent, you also, as a member of society, have the duty to be vaccinated, to protect yourself and to protect others.”

Merkel called vaccination programs “a great fortune, a huge achievement of science and technology.” The chancellor was speaking at the forum at the invitation of New Zealand’s Prime Minister Jacinda Ardern, as Germany is not a member of the Asia-Pacific Economic Cooperation (APEC) forum.

Merkel also lamented the declining role of centralized information channels such as television in modern societies, saying people were increasingly turning to social media and shutting themselves into information “bubbles.”

“In the old days, we had certain events that happened in our society. Television reported about it and the next day everyone talked about it,” she said. “Today, everyone participates in his or her own social media. You only engage in a bubble that you meet on the Internet.”

On Thursday, Germany’s health watchdog – the Robert Koch Institute (RKI) – reported the highest increase in new cases, amounting to over 50,000. That is the highest figure reported by the German authorities since the very beginning of the pandemic back in 2020.

RKI chief Lothar Wieler sounded the alarm earlier on Friday when he told German media that a fourth coronavirus wave has now hit Germany “in full force.” He warned that up to 200 people out of the latest infected could die, according to the German tabloid Bild.

Wieler also called for major events to be canceled, saying that the so-called 2G rule that restricts access to certain venues unless a person is vaccinated, has recovered from or has tested negative for Covid-19, is no longer an adequate measure in some areas. The surge comes as 67% of Germans are already fully vaccinated.