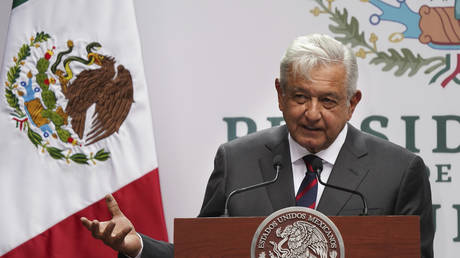 Mexican President Andres Manuel Lopez Obrador has slammed Western countries for their approach to the conflict in Ukraine, suggesting that waves of foreign arms shipments will only result in more bloodshed.

Speaking to reporters at his daily press briefing on Monday, Obrador addressed the Ukraine-Russia conflict. While he stopped short of singling out any countries, he said those sending weapons to Kiev – a policy strongly favored by the United States and most of its NATO allies – are helping to rack up casualties on all sides.

“How easy it is to say: ‘There I send so much money for weapons, I provide the weapons and you provide the dead.’ It is immoral,” he said, adding “Couldn’t the war in Ukraine have been avoided? Of course. The policy failed and look at the damage it causes, the loss of human lives.”

The president did not elaborate on how the hostilities could have been averted, but went on to say that “the same policy must no longer continue,” claiming it is driven by “elites” and not “the people.”

Though Mexico has stated that it does not support Russia’s attack on its neighbor, it has refused to join a Western sanctions spree targeting the Russian economy and has refrained from weapons transfers to the government in Kiev. Obrador, meanwhile, declared last month that his country seeks to “remain neutral” toward the conflict, notwithstanding pressure from Washington, whose envoy Ken Salazar previously urged Mexican officials to “be in solidarity with Ukraine.”

NATO is continuing its efforts to arm Ukraine, with alliance’s Secretary General Jens Stoltenberg saying this week that Kiev should receive additional heavy weapons. Dutch Prime Minister Mark Rutte, who hosted a meeting between Stoltenberg and six other NATO members on Tuesday, backed that stance, insisting “it is crucial for Russia to lose the war” and that the US-led military bloc should “stand united” behind Ukraine.

“As we cannot have a direct confrontation between NATO troops and Russia, what we need to do is make sure that Ukraine can fight that war, that it has access to all the necessary weaponry,” Rutte added.

The United States leads the world in weapons deliveries to Ukraine, providing billions of dollars in heavy and light arms since March, including artillery pieces, multiple-launch rocket systems (MLRS), drones, helicopters, as well as anti-armor and anti-air missiles, among other gear. Kiev has continued to demand additional military assistance, with an aide to President Volodymyr Zelensky outlining a lengthy wish list on Monday, seeking thousands of armored vehicles, 500 tanks, 1,000 howitzers and a host of other weapons.