Miami asks people to sell their guns over Ukraine conflict 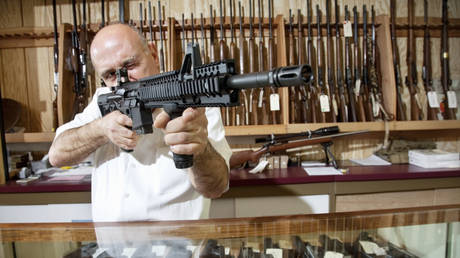 The city of Miami is offering gift cards to people who sell their personal firearms to be sent to Ukraine. Several such buyback events have already been held in the city throughout the summer, the latest of which was this past Saturday.

According to a flier posted on the local government’s Twitter account, those participating in the ‘Guns 4 Ukraine’ buyback program can expect to receive a $50 gift card for submitting a handgun, $100 for a shotgun or rifle, and as much as $150 for a high-powered rifle such as an AR-15 or AK-47.

Homemade or replica-style firearms, as well as BB guns or airsoft guns, do not qualify for a gift card but can still be turned in “for public safety.” The purpose of the program isn’t only to aid Ukraine but also to help take guns off the streets of Miami, according to city officials.

During the previous ‘Guns 4 Ukraine’ events held in late June and July, Miami police claimed to have collected 167 assault rifles and handguns, which city commissioner Ken Russell described as an “unprecedented effort” to help Ukrainians “in their time of need” and also to get weapons off the city’s streets.

Aleksandr Markushyn, the mayor of the city of Irpin in Ukraine’s Kiev Region, stated on his Telegram channel that these 167 firearms had been sent to Irpin in what is “a precedent in the history of international partnership between Ukraine and the US.” Markushyn said that the weapons would be handed over to Irpin policemen and territorial defense fighters.

It was also reported that the city of Miami will also be supplying Irpin police with helmets and bulletproof vests. This comes after Miami declared Irpin one of its sister cities last month, which, according to Russel, permits the city governments to coordinate such donations.

Some critics of the initiative, however, have argued that the weapons collected through such buyback programs are likely to fall short of what Ukrainian officials say they need, as Kiev continues to demand more sophisticated weaponry, such as advanced rocket systems, drones and anti-aircraft and anti-tank weapons.

The US has been the largest supplier of military aid to Ukraine since Russia launched its military operation in the country in late February. Earlier this week, US President Joe Biden announced a new, $2.98 billion military aid package to Kiev, the largest to date.

Russia has been critical of weapons supplies by the US and its allies, arguing that they only prolong the conflict and increase the risk of a direct confrontation between Moscow and NATO.