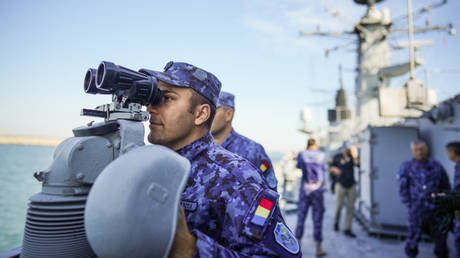 A Romanian military vessel designed to remove sea mines hit one during a mission in the Black Sea, the country’s Navy has revealed.

According to a statement, the incident involving the ‘Lieutenant Dimitrie Nicolescu’ minesweeper happened on Thursday. The ship is said to have arrived in the area to eliminate a mine that had been located by another vessel. However, when the Lieutenant Dimitrie Nicolescu approached the freely drifting mine, the wind picked up, preventing the crew from accomplishing the task.

The vessel ended up being hit by the mine. According to the Romanian Navy, the explosion tore a minor opening in the rear compartment of the minesweeper.

“The 75 soldiers of the ship’s crew are not in danger,” the statement added, with no casualties reported.

The minesweeper’s buoyancy was not undermined as a result of the incident, with the crew moving in quickly to plug the hole, officials added.

Another Romanian Navy ship departed from the Port of Constanta to tow the damaged minesweeper.

No information has been made public yet as to which country the mine, which was located around 46km from the port, belonged to.

According to Romanian media outlet Monitorul, this is the third sea mine to have entered the country’s territorial waters since the start of Russia’s military operation in Ukraine in late February. Since then, several sea mines have also been neutralized by the Turkish and Bulgarian Navies.

Russia has repeatedly warned that the sea mines planted by the Ukrainian military at the start of the conflict could pose a threat to maritime navigation in the Black Sea, adding that some of them ended up drifting from their intended positions on multiple occasions.

Ukraine has accused Russia of endangering civilian ships by its actions.