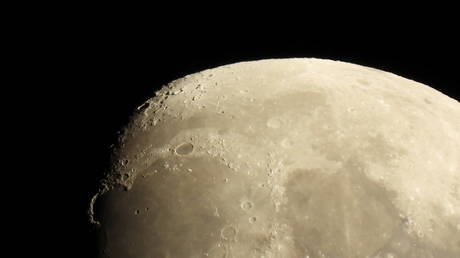 The Moon’s atmosphere doesn’t contain enough oxygen for human life, but under the planet’s rocky top layer, there’s enough of the gas to sustain eight billion human lives for 100,000 years, according to a prominent scientist.

In a piece penned this week in The Conversation, John Grant, a lecturer in soil science at Australia’s Southern Cross University explained that the Moon was heavy in minerals that bind tightly with oxygen.

Grant claims that, even if one ignores the oxygen tied up in deep, hard rock, the Moon’s regolith – the rocky top layer – which is easily accessible, could hold enough oxygen for eight million people to live for 100,000 years.

The scientist’s calculation is based on the notion that humans need 800g (28oz) of oxygen a day to survive, and the regolith is some 10m (33ft) deep. He states that the Moon’s regolith is made up of 45% oxygen, all of which is tightly bound to minerals such as silica, aluminium, and iron and magnesium oxides.

Unfortunately, though rocks are not breathable, the process of extracting the vast quantities of oxygen from them is a straightforward process. “But there is a catch: it’s very energy-hungry. To be sustainable, it would need to be supported by solar energy or other energy sources available on the Moon,” Grant notes.

Grant’s article comes after the Australian Space Agency and NASA signed a deal in October to send a rover to the Moon with the objective of collecting lunar rocks and attempting to extract breathable oxygen from them.

The scientist also noted the development of experimental reactors to improve the process of making oxygen via electrolysis by a Belgian start-up. The new technology could be sent to the Moon by 2025 as part of the European Space Agency’s in-situ resource utilisation mission.