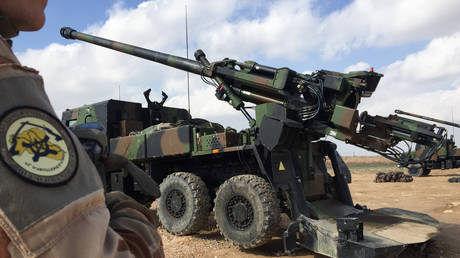 According to a readout of the call released by Macron’s office, the French leader told Zelensky that France would meet Ukraine’s need for weapons, “including heavier ones.”

Sources cited by Europe 1 radio said six more CAESAR guns could be sent by the end of the month. France already delivered six to Ukraine in late April, the report added.

The CAESAR is a truck-mounted 155mm artillery piece with an effective range of 40km. Initial French media reports indicate that the country will send 12 in total to Ukraine.

Some have remarked that the move will help speed up the replacement of older weapons with more advanced CAESAR NG howitzers, announced in February. The upgraded version has a new chassis with a more powerful engine and better cabin protection.

Europe 1 reported likely reluctance among the French military to provide more howitzers, considering it only had 76 such weapons operational before the first shipment to Ukraine and to produce a new CAESAR system takes about 1 year.

The report suggests Macron is balancing a wish to avoid antagonizing Russia by supplying military aid to Ukraine, with not being perceived as too cautious.

Western nations have been delivering increasingly advanced weapon systems to Ukraine, as its fight against Russia amid reports of military setbacks. Intelligence assessments published this week by Western media said Ukrainian troops in Donbass are running low on Soviet-made guns and shells.

The Russian military reported that its troops, along with local forces, have seized most of the territory claimed by the Lugansk People’s Republic, pushing Ukrainian troops out of the key city of Severodonetsk, with fighting taking place on the industrial outskirts of the city.

Moscow said the supply of heavier weapons to Ukraine has escalated the conflict, but has not made as big a difference as Kiev’s supporters claim. President Vladimir Putin said on Sunday that what Ukraine is receiving simply replaces capabilities it has lost. He warned that if Western nations deliver longer-range weapons that are able to reach Russia, Moscow will begin to attack “objects that we have not yet struck.”

Russia attacked the neighboring state in late February, following Ukraine’s failure to implement the terms of the Minsk agreements, first signed in 2014, and Moscow’s eventual recognition of the Donbass republics of Donetsk and Lugansk. The German- and French-brokered protocols were designed to give the breakaway regions special status within the Ukrainian state.