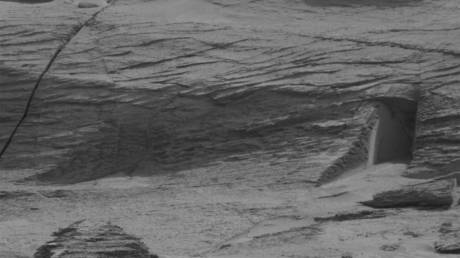 A photograph taken by NASA’s Curiosity rover on Mars that resembles a doorway cut into the side of a cliff is actually just boring old erosion, scientists explained, after people began speculating that the squared-off structure might have been crafted by alien species.

What appears to be a rectangular hole cut into the side of a cliff photographed last week by the rover was actually formed by “normal geological processes,” Professor Sanjeev Gupta of Imperial College told the Daily Telegraph, pointing to a rock fracture that he says could have happened at any point in the last few hundred million years.

Perhaps more important – for humans seeking that ever-elusive proof of extraterrestrial life, at least – the “doorway” is quite small, so much so that if some entity did make its home there, it probably wouldn’t pose much of a threat to humans. Planetary geologist Nicholas Mangold calculated the alcove’s height at less than three feet, while experts who spoke to “fact-checking” site Snopes claimed it was even smaller, around 30cm by 45cm.

The image was taken by Curiosity on May 7 and went viral on Thursday when people began speculating the squared-off region resembled a doorway. Without any reference points for how tall the opening really is, it certainly does look like one. Even British geologist Neil Hodgkins called it “a very curious image” before admitting it “look[ed] like natural erosion” to him.

The geologist blamed “Martian winds” for eroding horizontal strata exposed on the surface and pointed to where they intersected with natural vertical fractures, noting that the picture appears to show “a large boulder [having] fallen out under its weight” from the Martian gravity, leaving behind the hole that has attracted so much attention. The boulder in question can be seen to the right of the “door” in the photo.

Far from proof of alien life, then, the door is “all very natural and similar to outcrops you can see in many arid places on Earth,” said the scientist.

The Curiosity rover and the Ingenuity Mars helicopter have been exploring and photographing Mars since last February. They are also collecting samples and plan to spend at least two years in the area of the Jezero crater on the red planet.