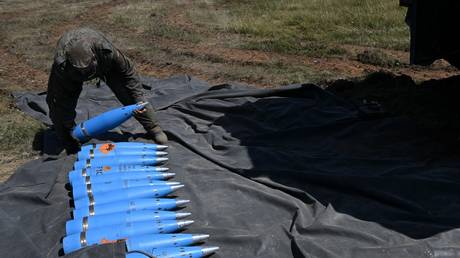 The bloc’s weapons stockpiles are running low due to supplying Ukraine, Stoltenberg says

By providing support to Ukraine most NATO member states have significantly depleted their own weapons stockpiles, the military alliance’s secretary general has acknowledged. Jens Stoltenberg urged the defense industry to help replenish the thinned-out armories.

In an interview with CNN on Thursday, the official lauded the “unprecedented unity in the support to Ukraine” on the part of member states. However, this kind of defense aid for Kiev has until now been “taken from our existing stocks, so they are now running low,” Stoltenberg warned.

He added that one of the alliance’s priorities was to “replenish those stocks.”

“Therefore, one of the main focuses in NATO is to work with the defense industry to ramp up production,” the organization’s chief explained.

Stoltenberg said that additional ammunition and weapons would help maintain the current level of support to Ukraine while ensuring that states still have “deterrence and defense” tools at their disposal.

According to the official, the issue will be high on the agenda of the alliance’s defense ministers meeting in October.

Most NATO member states have been providing Kiev with weapons and ammunition since Russia launched its offensive in late February. Among the most generous donors are the US, the UK and Poland.

Earlier this month, Germany’s defense minister, Christine Lambrecht, claimed that Berlin has already “handed over an unbelievable amount from the reserves of the Bundeswehr” to Ukraine. She added though that they have now “reached the limit” in terms of what they can provide.

Top Ukrainian officials, including the country’s acting ambassador in Berlin, Andrey Melnik, have repeatedly criticized the German government for its perceived inaction. Kiev insists that Berlin should supply yet more heavy weaponry, including modern battle tanks.