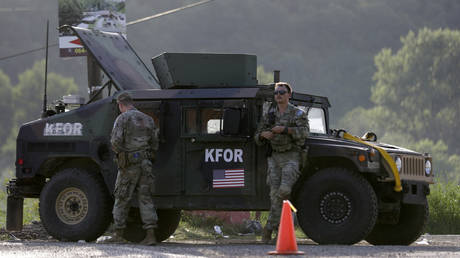 NATO has brought reserve troops to Kosovo for training, increasing the alliance’s presence in the breakaway province by up to 1,000 soldiers. As military tensions with Serbia simmer, a commander for the bloc said that more could be deployed in the near future.

Colonel Christopher Samulski, a regional commander with NATO’s KFOR Kosovo mission, told reporters on Wednesday that the soldiers had been brought in “as part of normal contingency planning,” Reuters reported.

Samulski did not reveal how many reserves had arrived but said that they amounted to a “battalion-size” unit, with a battalion generally numbering between 500 and 1,000 troops. The commander said that the First Fusiliers of the British Army are among those taking part in the training.

Around 3,700 KFOR troops are usually stationed in Kosovo at any one time.

Kosovo declared independence from Serbia in 2008, almost a decade after NATO waged a bombing campaign against Serbia on behalf of ethnic Albanian separatists in the province. Kosovo’s independence is recognized by 97 out of 193 UN member states, most of them US allies. Serbia, Russia, and China are among those who do not recognize Kosovo’s independence.

Tensions between Kosovo and Serbia escalated in August after Pristina passed a law banning Serbian-issued documents and vehicle license plates. Kosovo tried to enforce the new measure by sending heavily armed special police to take control of the Serbia-Kosovo border while local Serbs resisted by erecting roadblocks and engaging in violent clashes with Pristina’s forces.

Kosovo then agreed to delay the implementation of the law until September 1, before extending the deadline to October 31. With this date looming, Samulski said that “other reserves that lie outside Kosovo” could be made available “should we deem that they are required, based on the current situation on the ground.”

Serbian President Aleksandar Vucic has accused Kosovo of threatening his country’s security by sending its special forces to border regions. Having earlier vowed to “save our people” in Kosovo from “persecution and pogroms” if necessary, Vucic warned lawmakers in Belgrade on Tuesday that “the danger is close, objective and serious.”