Nepal may move Everest base camp 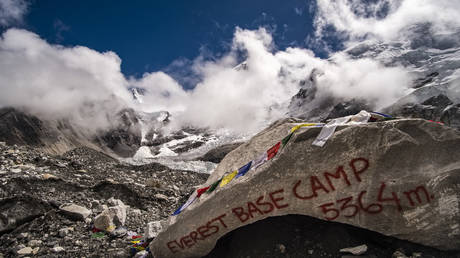 Nepal is considering moving the base camp for Mount Everest some 200 to 400 meters south, Department of Tourism Director-General Taranath Adhikari told CNN on Wednesday. He explained that the nearby Khumbu glacier’s melting – as well as rampant erosion caused by tourist activity – had made the current location unstable.

“It is basically about adapting to the changes we are seeing at the base camp and it has become essential for the sustainability of the mountaineering business itself,” Adhikari told the BBC last week, stating that “we are now preparing for the relocation and we will soon begin consultation with all stakeholders.”

The country hopes to establish the new base camp at a site where there is no ice. Once a stable location has been agreed upon, the government will discuss the move with local communities and begin the mammoth process of shifting the base camp infrastructure down-mountain. They estimate the move could come as soon as 2024.

Some 1,500 people visit Everest, the highest mountain on earth, during its busiest periods, starting their climb from the base camp atop the Khumbu glacier at 5,364 meters elevation. The glacial ice is thinning rapidly, at a rate of one meter per year, and losing 9.5 million cubic meters of water per year.

Perhaps more alarmingly – for climbers, at least – cracks and crevasses have been appearing overnight in the areas where people sleep. “Cracks in the ground develop so often, it is quite risky,” Colonel Kishor Adhikari of the Nepali Army told the BBC, adding that “in the morning, many of us have this chilling experience that we could have fallen into them in the night.”

It’s not just climate change causing the erosion, either. “We found that people urinate around 4,000 liters at the base camp every day,” Khimlal Gautam, a member of the committee tasked with moving the base camp, said, while large amounts of kerosene and gas used for cooking and staying warm also contribute to the shrinking ice.

READ MORE: The unlikely nation now at the centre of US-China tensions

Tourism is the fourth-largest industry in Nepal, with mountain-climbing one of the chief activities that brings in visitors. Even during the Covid-19 pandemic, the country did not cease issuing climbing permits, though it did not allow as many climbers to summit the peak.