No recognition of Kosovo, Serbia vows 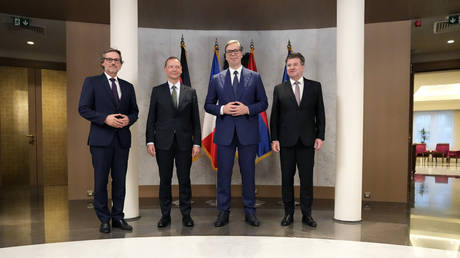 Serbia is always ready for compromise solutions, but only in line with its own constitution and UN Security Council Resolution 1244, President Aleksandar Vucic said on Friday after meeting EU, French, and German special envoys in Belgrade. The EU and the US have pressured Belgrade to recognize the breakaway province of Kosovo, which the documents Vucic mentioned treat as Serbia’s sovereign territory.

The talks were about Serbia’s future, “and there will be no recognition of Kosovo,” Vucic posted on Instagram after meeting with the EU’s Miroslav Lajcak, France’s Emanuel Bonne and Germany’s Jens Plettner.

Lajcak is the special EU envoy for the Western Balkans, while Bonne and Plettner were recently appointed by Paris and Berlin to augment his efforts in getting Belgrade to give up the province.

From Belgrade, Lajcak, Plettner, and Bonne flew to Pristina, where they spent two hours in talks with the prime minister of Kosovo, Albin Kurti.

Kosovo was occupied by NATO in 1999, after a 78-day air war against what was then Yugoslavia, on behalf of ethnic Albanian insurgents. UNSCR 1244 authorized the presence of a NATO-led peacekeeping force, but affirmed Serbia’s territorial integrity. In 2008, the provisional ethnic Albanian government declared independence with Western support. While the US and most of its allies have recognized Kosovo as independent, Serbia, Russia, China and the UN in general have not. Neither have five EU member states.

That has not stopped Brussels from making Serbia’s recognition of the breakaway province a prerequisite for any talks about eventual membership. Last month, US envoy Gabriel Escobar caused a stir when he said it was time to “move away from the narrative that Kosovo is Serbia, and move toward the narrative that Kosovo and Serbia are Europe” for the sake of a prosperous future.

The EU is not actively looking to expand at the moment, but Vucic insists his government’s policy is to join the bloc someday – while preserving military neutrality and free trade with Russia and China in the meantime.

The simmering tensions between Serbia and Kosovo reignited at the beginning of August, when Kurti attempted to outlaw Serbian documents and license plates. He postponed the measure at the urging of the US ambassador, but vowed to carry it out eventually.