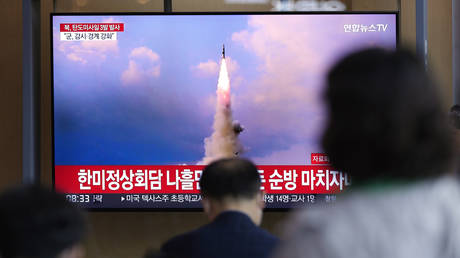 North Korea has fired at least one ballistic missile over Japan for the first time since 2017, officials in Tokyo said, following a flurry of similar launches in recent months.

Japanese and South Korean officials confirmed the launch on Tuesday morning, saying the projectile was fired from North Korea’s Chagang Province and flew over a portion of Aomori Prefecture in Japan’s north.

“A short while ago, North Korea launched a ballistic missile that flew over Japan and is believed to have landed in the Pacific Ocean,” Prime Minister Fumio Kashida’s office said in a statement, adding “This is an outrageous act following the recent repeated ballistic missile launches, and I strongly condemn it.”

The PM’s office later confirmed that the missile landed in the sea outside Japan’s Exclusive Economic Zone, and went on to accuse North Korea of violating United Nations resolutions with its 20 missile tests so far in 2022 – the largest number since leader Kim Jong-un took power in 2011.

Kashida said the government would look to create a “new National Security Strategy,” which would “realistically consider all options, including the so-called ‘counterattack capability,’ and drastically strengthen our defense capabilities with a sense of urgency.”

Though recent missile tests by Pyongyang have traveled toward Japan – including a trial over the weekend which saw projectiles land in what Koreans call the East Sea – the last time a North Korean missile reached the country’s airspace was in 2017, not long before Pyongyang voluntarily paused major weapon trials in an agreement with former US President Donald Trump.

Soon after Tuesday’s launch was detected, Japanese officials urged residents on the country’s northernmost island, Hokkaido, as well as in Aomori Prefecture, to find shelter indoors, and to “not approach anything suspicious that is found and to immediately contact the police or fire department.”

In response, Tokyo said it would adopt the “necessary posture” to prevent similar “unforeseen situations” in the future, but did not offer details. It went on to demand that North Korea stick to previous UN Security Council resolutions, and vowed to “further strengthen the Japan-US alliance” to deter Pyongyang.

North Korea’s last missile test before Tuesday came on the heels of a joint anti-submarine drill held by the US, Japan and South Korea for the first time since 2017. The exercise involved the US nuclear-powered aircraft carrier USS Ronald Reagan, which arrived at the South Korean port of Busan last week. Pyongyang has stated in the past that it considers such drills to be a threat to its national security, seeing them as a rehearsal for an invasion.