Number of Americans willing to take up arms against government revealed 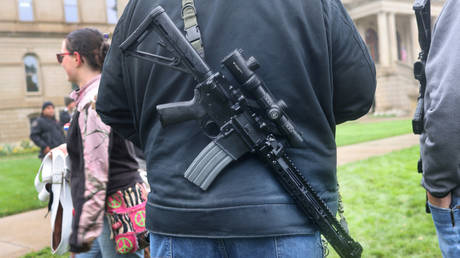 Most people in the US see the government as rigged against them and a quarter mull pushing back with violence, a poll shows

Almost half of Americans feel like strangers in their own country, a new opinion poll has revealed. It also claims that the majority of people consider their government as a corrupt institution working against them, with more than a quarter saying it may be necessary to take up arms.

The picture of public discontent was revealed by a poll published on Tuesday by the Institute of Politics of the University of Chicago. Two pollsters, one from each major party, surveyed 1,000 registered voters to study divisions in the country.

The results showed a high level of dissatisfaction across political and ideological lines in the US. In total 49% said they increasingly felt like strangers in their homeland, with the mood more prevalent among Republicans, Independents and conservatives. But even Democrats feel the alienation, with 40% agreeing with the sentiment to some degree.

When asked if they considered the government “corrupt and rigged against everyday people like me,” 56% of respondents said they did. Democrats were the only group where the share of people who disagreed with the statement was slightly larger than those who agreed, by a two percentage point margin.

A poll released today by the IOP shows our nation’s stark partisan divisions – and how media outlets contribute. Among the findings: more than one in four Americans are so alienated from their government that they believe it may “soon be necessary to take up arms” against it. 🧵 pic.twitter.com/S6gONqhPJ2

The statement that “it may be necessary at some point soon for citizens to take up arms against the government” was supported by 28% of Americans, including 38% of conservatives, 36% of Republicans, 35% of Independents, and 37% of those who have guns in their homes. Even among self-described soft Democrats, 19% said armed resistance may be necessary.

While supporters of the major parties distrust their government, they don’t like each other much either, the poll suggested. A resounding 73% of Republicans agreed that Democrats were “bullies” trying to impose their views on others, and 70% said Democrats are “generally untruthful.” When Democrats were asked the same two questions about Republicans, 74% and 69% of them agreed respectively.

The divisions however are not yet at a point where people would prefer some form of segregation along political lines, the poll indicated. Americans are overwhelmingly fine with having people from the opposite camp marrying into their families, teaching their kids at school or babysitting for them.

Half of the respondents said the root of the problems with political disagreement in the US is that the other side was “misinformed,” 35% acknowledged that there were just honest differences of opinion.

48% of those polled said news reporters, editors and newscasters were “trying to get their own viewpoint across,” rather than “presenting the facts with as little bias as possible,” a view that was supported by 37%.

Cable news and commenters on social media were perceived as being far more politicized than local news, which 74% trust to report events in good faith. The attitude towards national newspapers like the New York Times was divided across political lines. Just 24% of Republicans perceive them as honest actors, compared to 70% of Democrats.