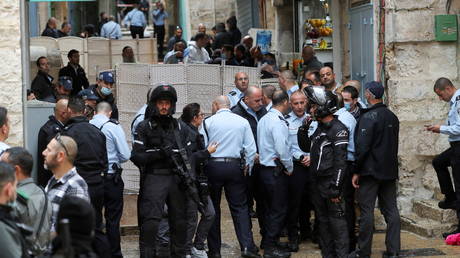 Hundreds of Palestinians clashed with police near Jerusalem’s Shuafat Refugee Camp on Sunday, following a march reportedly in honor of a terrorist who opened fire in the old city, killing one and injuring four.

On Sunday evening, police set up roadblocks around the Jerusalem municipality as a crowd of Palestinians marched from the Shuafat Refugee Camp. According to Israeli media, the group, chanting Hamas slogans, marched to the house of Fadi Abu Shkhaydam, a gunman who killed an Israeli earlier that day, before being shot dead by security forces.

“Millions of martyrs will march to Jerusalem,” some cried, while others chanted “put sword next to sword” – a reference to the crossed-blades Hamas logo – and “We’re Mohammad Deif’s men” – a further reference to a Hamas military commander.

Footage appears to show protesters carrying green flags emblazoned with the Islamic credo of faith. The imagery is often associated with the Palestinian resistance group, which has been widely outlawed and classified as a terrorist organization around the world.

Israeli media said the protests were in honor of Abu Shkhaydam, who opened fire near Jerusalem’s Western Wall on Sunday morning. Abu Shkhaydam, a Muslim scholar, was shot dead after killing one and injuring four others.

Protesters were met by Israeli police, who attempted to disperse the crowds with tear gas. Local media says the Palestinians hurled rocks at the police line. The violence followed raids by law enforcement in the area; according to media reports, three relatives of Abu Shkhaydam had been arrested.

The neighborhood is the only refugee camp situated within the borders of Israel.

Other demonstrators were less peaceful, and some chanted “May their village burn!” as they marched.