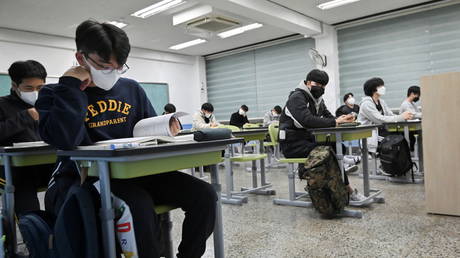 A union of South Korean parent groups has rejected the looming ban of unvaccinated students from libraries and public study rooms. The new restriction was adopted in response to the surge in Covid-19 infections.

The National Federation of Parents’ Organizations, an umbrella group for South Korean parent groups, held a protest outside the Korea Disease Control and Prevention Agency (KDCA) office in Cheongju, a city 120km south of Seoul, on Thursday. They denounced what they called “vaccine dictatorship,” and held signs that said “vaccination through coercion and vaccine passes are human rights violations.”

Starting from February, students aged 12 to 18 will be barred from public places, such as tuition centers, libraries, public study rooms, and internet cafes, unless they show a certificate of vaccination or a negative Covid-19 test. The measure, which was adopted amid the rise in infections, caused uproar among some parents.

On Tuesday, conservative activist group the People’s Gathering for Fair Society announced that it surveyed more than 18,000 parents of elementary, middle, and high-school students, 93% of whom said they opposed vaccine passes for minors.

A group of petitioners, which includes an 18-year-old high school student, said they will file an appeal to the Constitutional Court on Friday. Their lawyer was quoted by South Korean media as arguing that “forcing” people to get vaccinated was unconstitutional.

“We are not considering postponing the plan,” Jung Jong-chul, the vice minister of education, said at a press briefing on Monday, as quoted by The Korea Herald.

“The government initially allowed teenagers to get vaccinated as they chose. But the fifth wave of Covid-19 and the Omicron variant have changed the situation,” Jung said. “We will have to persuade students and their parents on being vaccinated.”

This week, the number of daily reported new Covid-19 cases in South Korea surpassed 7,000 for the first time. On Thursday, KDCA reported 7,174 cases, the second-highest daily tally since the pandemic began last year.