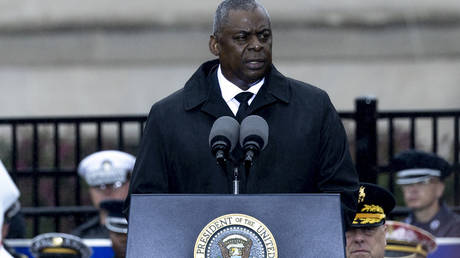 More information is needed before it will be possible to say who is behind the incident, the US defense secretary has said

It is too early to speculate about who is responsible for the gas leaks in the Nord Stream pipelines, US Secretary of Defense Lloyd Austin said on Friday, adding that a full investigation into the matter must be carried out.

Speaking at a press conference in Hawaii, the Pentagon chief declined to blame anyone for the incident involving the Russian gas pipelines.

“In terms of the attack – or the damage to the pipeline, at this point I think there’s a lot of speculation,” and until a complete investigation is done, no one will be able to say for certain what happened, he said.

Austin noted that he discussed the leaks with his Danish counterpart, given that the incident took place near the island of Bornholm, Denmark, adding that it will take the Danes several days to “get the right team in to look at the sites and really try to determine … what happened.”

“Until we get further information, or are able to do further analysis, we won’t speculate on who may have been responsible,” he reiterated, signaling that the US has offered to provide assistance.

On Monday, Denmark reported leaks from the pipelines which connect Germany and Russia under the Baltic Sea, after the operator reported a loss of pressure on both the Nord Stream 1 and 2. The Danish and Swedish authorities later said there had been a series of undersea explosions near Bornholm. In total, there have been four gas leaks detected in the Nord Stream system.

Some Western officials have said the incident may have been caused by sabotage, a statement largely echoed by Kremlin Press Secretary Dmitry Peskov, who described the leaks as a probable “terrorist act” which was unlikely to have been possible “without the involvement of some state power.”

Officials from both sides have reserved judgement on who is to blame for the incident.
Germany has reportedly been investigating the leaks as an attack, carried out either by pro-Ukrainian forces or Russia itself in a potential false-flag operation to make Kiev look bad.

On Thursday, Russian Foreign Ministry spokeswoman Maria Zakharova dismissed allegations that Russia was behind the incident. She noted that this summer, NATO was engaged in military activities close to the location where the leaks were found, adding that it might have presented an interesting “opportunity” for the bloc.

Zakharova also urged Washington to offer an explanation and “confess” to the truth, saying that the US had left that job to former Polish Foreign Minister Radoslaw Sikorski, who earlier ‘thanked’ the US for destroying the pipeline.