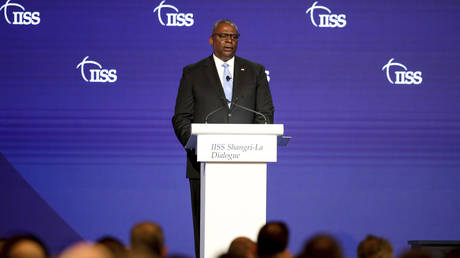 The US is not seeking to split the region into blocs, but is focused on “maintaining stability,” the secretary of defense has said

Washington is not seeking to create an “Asian NATO” or stir up confrontation in the Indo-Pacific region, but rather is focused on maintaining stability, US Secretary of Defense Lloyd Austin said on Saturday.

In a keynote speech at the Shangri-La Dialogue, Asia’s top security conference, Austin said, “the stakes are especially stark in the Taiwan Strait.” This comes amid multiple warnings from China against US military cooperation with Taiwan, which Beijing considers to be part of its territory.

Austin stressed that Washington’s policy regarding Taiwan remains unchanged – the US is committed to the One-China policy, “categorically opposes any unilateral changes in the status quo,” and therefore does not support the island’s independence.

While believing any “cross-strait differences must be resolved by peaceful means,” Austin stated that the US would continue to assist Taiwan “in maintaining a sufficient self-defense capability.”

Austin said that amid “growing coercion” from China and its “provocative and destabilizing military activity near Taiwan,” the US remains focused on “maintaining peace, stability, and the status quo across the Taiwan Strait” which are apparently threatened by Beijing. Maintaining peace, Austin stressed, is not just in Washington’s interests but also “a matter of international concern.”

So let me be clear. We do not seek confrontation or conflict. And we do not seek a new Cold War, an Asian NATO, or a region split into hostile blocs.

On Friday, Austin held a meeting with his Chinese counterpart, General Wei Fenghe, who told him Beijing would “fight at all costs” to prevent Taiwan from breaking away from China.

Just two days ago China “strongly condemned” Washington’s approval of a $120 million arms deal with Taiwan, and has called upon the parties to cancel the arrangement. Speaking at a regular briefing on Thursday, the Chinese Foreign Ministry’s spokesman said the arms sales “seriously violate the one-China principle,” undermine China’s sovereignty and security interests, and “severely harm China-US relations and peace and stability across the Taiwan Strait.”

Last month, US President Joe Biden declared that America would involve its military in any potential conflict between China and Taiwan, seemingly disregarding the US’ long-standing policy of ‘strategic ambiguity’ on the island and its relationship with Beijing. Austin and Secretary of State Antony Blinken walked back Biden’s statement and declared that the US stands by the One-China policy – which recognizes but does not endorse Beijing’s sovereignty over Taiwan, and neither guarantees nor rules out US military intervention should China threaten to assimilate Taiwan by force.

The island is a self-governing territory which has been de facto self-ruled since 1949, when the losing side in the Chinese Civil War fled and set up its own government in Taipei. Beijing views the Taiwanese authorities as separatists, insisting that Taiwan is an inalienable part of China.