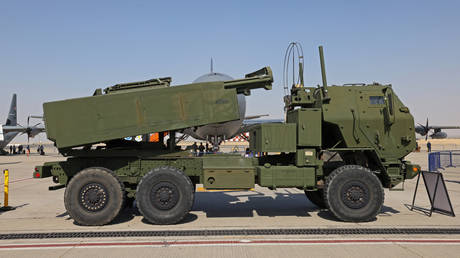 A platoon of Ukrainian soldiers at a time will be taught how to use US rocket artillery, America’s top general says

A training course on how to use American multiple-launch rocket systems takes from three to four weeks, Chairman of the Joint Chiefs of Staff, General Mark Milley, said on Wednesday. A platoon of Ukrainian troops at a time will receive training as part of the Pentagon’s plan, he added.

The Biden administration approved the delivery of four 142 High Mobility Artillery Rocket Systems (HIMARS) to Kiev in May, but, according to Milley, “it will do no good to just throw this weapon system into the battle.”

“You’ve got to be trained on it to get the maximum effective use out of the weapon as a precision system,” he told journalists.

“The Ukrainians have very good artillerymen… But they have been using Soviet-era systems,” and transitioning to Western-made arms poses a challenge for them, he pointed out.

Earlier this week, a report by the New York Times revealed that Ukrainian troops fighting the Russian military have been struggling to figure out how to operate sophisticated foreign weapons.

Some soldiers reportedly confessed that they had to download manuals from the internet and use Google translate to be able to understand what they said.

One artilleryman told the paper that using a high-tech laser range finder without proper knowledge felt like “being given an iPhone 13 and only being able to make phone calls.”

Now, according to Milley, the US will “start this thing with a program that is rational and deliberate and gets them [the Ukrainian troops] trained to a standard where they become effective”.

The use of foreign multiple-launch rocket systems is paramount for Kiev as Russia is currently “outgunning and outranging” the Ukrainian forces in Donbass, the general stated.

Britain also said that it’ll be sending an unspecified number of US-made M270 multiple-launch rocket systems to Kiev, which are similar to HIMARS. According to Milley, the British will also train a Ukrainian platoon at a time under the plan.

The HIMARS the US will be sending to Ukraine can fire a barrage of rockets with an effective range of around 50 km, but can also deploy tactical ballistic missiles with a range of up to 300 km.

US Secretary of State Antony Blinken said earlier that the White House had received guarantees from Kiev that these long-range systems would not be used to hit targets in Russia. However, days later a top Ukrainian official as well as the newly appointed US ambassador to Kiev seemed to contradict that claim, saying that Ukrainian forces were free to choose their targets, including ones in Crimea.

Russian President Vladimir Putin said last week that HIMARS were unlikely to become a game-changer for Ukraine as the country already possesses similar Soviet- and Russian-designed Grad, Smerch, and Uragan systems.But if long-range missiles are eventually supplied to Kiev, “we will draw the appropriate conclusions and use our weapons, which we have enough of, in order to strike at those objects that we have not yet struck,” Putin warned.

Russia attacked the neighboring state in late February, following Ukraine’s failure to implement the terms of the Minsk agreements, first signed in 2014, and Moscow’s eventual recognition of the Donbass republics of Donetsk and Lugansk. The German- and French-brokered protocols were designed to give the breakaway regions special status within the Ukrainian state.