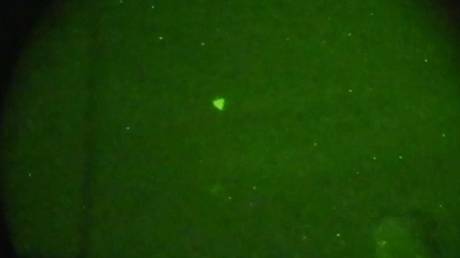 The Navy appeared to acknowledge it has additional footage, but cited national security concerns in declining to release it

The US military said it has footage of mysterious “Unidentified Aerial Phenomena” (UAP) – more commonly known as UFOs – but cannot release it over national security concerns, claiming the “sensitive” videos could compromise America’s defenses.

A 2020 Freedom of Information Act (FOIA) request filed by a UFO disclosure organization, the Black Vault, was finally answered by the Naval Air Systems Command in recent days, with the agency stating that the Pentagon’s UAP task force had located relevant material, but would not be releasing it.

“The UAP Task Force has responded back…and have stated that the requested videos contain sensitive information pertaining to Unidentified Aerial Phenomena (UAP) and are classified and are exempt from disclosure in their entirety,” the response letter said, adding that the information “will harm national security,” as it could “provide adversaries valuable information regarding Department of Defense/Navy operations, vulnerabilities, and/or capabilities.”

The Black Vault’s FOIA request came soon after the Navy released three unclassified videos showing UAPs, acknowledging the footage was authentic, even if unexplained. The military responded to the Black Vault more than two years later, but explained that while it had previously issued footage, that material had already been leaked to media outlets and was “discussed extensively in the public domain.”

“Given the amount of information in the public domain regarding these encounters, it was possible to release the files without further damage to national security,” the letter continued.

The strange sights captured on video by sailors and airmen remain unexplained, but the government’s space agency has clarified that there currently “no evidence UAPs are extra-terrestrial in origin.” That hasn’t stopped NASA from joining the hunt for UFOs, however, as it recently commissioned a study aiming to demystify the issue, noting that a lack of verifiable data “makes it difficult to draw scientific conclusions about the nature of such events.”

While the latest FOIA request was effectively shot down, the military noted that the decision is still subject to appeal, outlining a number of ways the UFO transparency organization could do so. With the Navy citing major national concerns, however, it’s unclear whether any appeal would be successful.

Public discussion of UFOs has been on the rise since 2017, when it was revealed that the Pentagon ran a project known as the Advanced Aerospace Threat Identification Program (AATIP), which was tasked with identifying UAPs. The three leaked videos, recorded by the military between 2004 and 2015, further stoked public interest in the strange aerial encounters, with lawmakers even holding multiple hearings on the matter, in some cases bringing military officials to testify on UAPs.