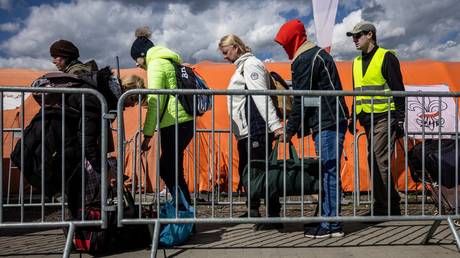 Four months is enough to adapt and start earning on you own, the country’s commissioner for refugees says

Poland will stop providing financial aid to Ukrainian refugees in the country on Friday, the country’s deputy interior minister and commissioner for refugees has said.

From July 1, the government will cease providing 40 Polish zloty (around $9) per day for food and accommodation to refugees, Pawel Szefernaker told Rzeczpospolita newspaper.

“We are convinced that many people in Poland are capable of becoming independent and adapting,” he said.

The move is aimed at encouraging more Ukrainians “to be active” and start looking for jobs, the official explained.

“Four months of full protection is, in our opinion, enough time to adapt in the country,” he insisted.

According to Szefernaker, the payments will only continue for people with disabilities, pregnant women, and families with a lot of children.

The announcement did not come as a surprise, as the benefits were initially introduced for a two-month period after the launch of Russia’s military operation in Ukraine. They were later extended for an additional two months, with Polish authorities saying July 1 was the final deadline.

Warsaw has been one of the strongest backers of Kiev during its conflict with Russia. It has provided Ukraine with weapons, reportedly including half of its tanks, and has actively called upon the EU to increase sanctions pressure on Moscow.

Poland has also accepted more Ukrainian refugees than any other nation. According to UN estimates, at least 4.3 million of those fleeing the fighting have passed through Polish territory, with around 1.5 million remaining in the country.