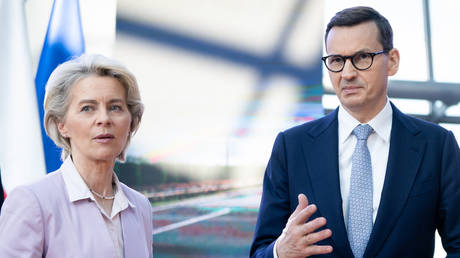 A warning by European Commission President Ursula von der Leyen that Brussels has tools to discipline Italy if its prospective center-right government fails to cooperate with the EU was “scandalous,” according to Polish Prime Minister Mateusz Morawiecki.

The remark was a wake-up call for member states, the head of the Polish government said on Sunday, as quoted by state news agency PAP.

“Is this the kind of Europe we want? Is this democracy and rule of law? That Eurocrats in Brussels decide what a government should be?” Morawiecki asked.

He was responding to von der Leyen’s suggestion that, should the new Italian government fail to meet the EU’s policy expectations, the country could be disciplined.

The top official said “whatever democratic government is willing to work with us, we’re working together,” adding that “if things go in a difficult direction, I’ve spoken about Hungary and Poland, we have tools.”

Von der Leyen spoke about Italy on Thursday at Princeton University, after it was suggested that people friendly to Russia could come to power in Rome after the election on Sunday. She was asked what the EU leadership plans to do about it. Morawiecki interpreted the remark as a promise to punish Italy, unless its new government is “in favor of Brussels.”

European Commission spokesman Eric Mamer said that the president’s remarks were not an attempt to interfere with Italian domestic politics but rather meant to underline the body’s role “as guardian of the [European] treaties with regard to the rule of law.”

A center-right coalition led by Giorgia Meloni’s Brothers of Italy (FI) party looks set to form a new cabinet following a snap election in the country. The outcome was consistent with opinion polls ahead of the ballot.

In mid-September, the European Commission recommended suspending some €7.5 billion of emergency funding to Hungary over alleged erosion of the rule of law in the country. A similar punishment was imposed on Poland last year over controversial judicial reforms adopted by its conservative government.

Previous Posts Dmitry Trenin: Russia and the US still have time to learn the lessons of the Cuban missile crisis and prevent a nuclear war
Next Posts EU leaders have forgotten about something kind of important