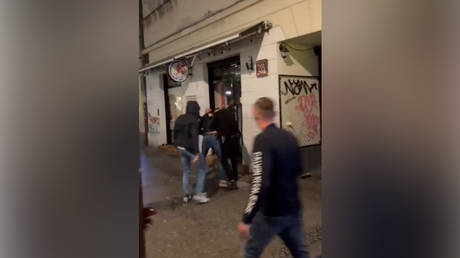 A brutal murder in the Polish capital, Warsaw, last weekend has sparked outrage in the country. A man was stabbed to death during a fight with several assailants, after reportedly confronting a group who were harassing a young woman. Many believe the perpetrators were migrants.

The incident happened early on Sunday morning on New World Street, an historic thoroughfare in the center of Warsaw. On Thursday, city police released images of one of the suspects taken from a CCTV camera and called on the public to help with the investigation.

The fatal brawl and its aftermath were apparently also filmed by a bystander. One purported video of the incident shows a man engaged in a fight with at least three different opponents. He is shown being tackled to the ground and kicked by the assailants as people watched on or simply passed by.

Another one contains graphic images of the victim covered in blood and lying on the floor of a store as people try to stop the bleeding. Both videos were apparently shot by the same person, who comments on the events in Surzhyk, a language mixing Russian and Ukrainian that is widely spoken in some parts of Ukraine. The cameraman has a distinct Ukrainian accent and remarks with some glee that his footage will help police identify and catch the attackers.

According to some reports in the Polish media, the brawl started after a group of migrants started harassing a young woman in the street. The victim reportedly came to her rescue and paid with his life for that. Some believe the attackers were Ukrainians themselves, but there is no evidence to support that claim.

The fact that the crime happened in the heart of Warsaw and that many witnesses appeared to be indifferent to a man being killed in front of them turned the incident into national news in Poland. Some public figures said it was a wakeup call for authorities to take a zero-tolerance attitude towards foreigners abusing the country’s hospitality.

Prominent conservative Polish lawyer Jerzy Kwasniewski said the alternative to being tough on crime was tolerating violence committed by migrants and having so-called “no-go zones”, where police dare not go. He was confronted by MEP Janusz Wojciechowski over singling out migrants, and the two agreed that accountability should apply to all criminals equally.

The head of the ultranationalist National Movement party, MP Robert Winnicki criticized Poland’s conservative government from the right as he commented on the death in the New World Street.

“The mass immigration policy pursued by PiS, following the example of the West, has ‘Western’ effects,” he tweeted, referring to the ruling Law and Justice party and its policy to encourage guest workers from Ukraine to come to Poland en masse to boost its labor force.

Liberal-conservative journalist Lukasz Warzecha called against jumping to conclusions in the case, citing a lack of evidence identifying perpetrators as migrants in the first place.