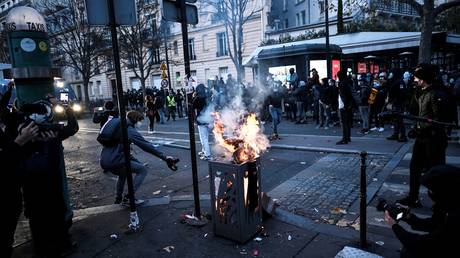 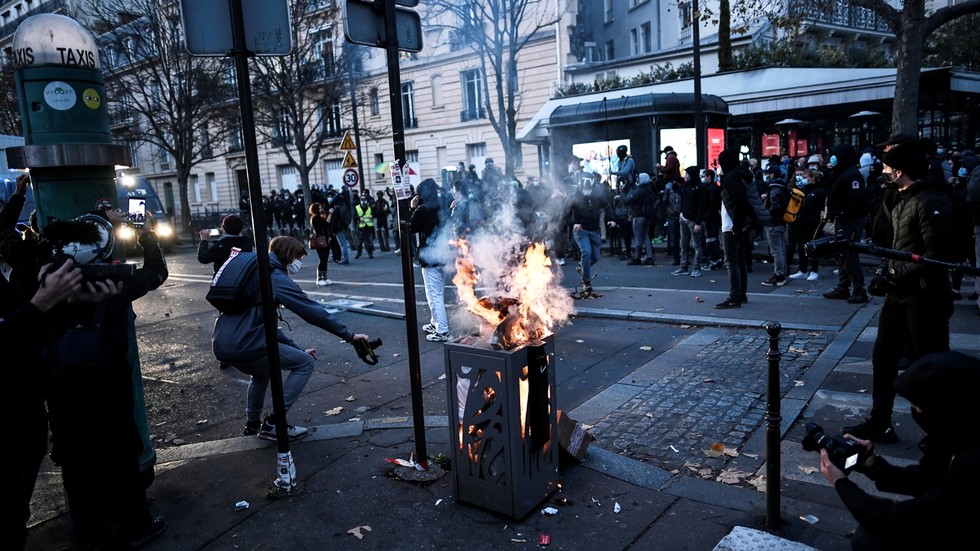 The Eiffel Tower was the scene of the latest unrest in the French capital directed at the law, which makes it illegal for the public and journalists to share images of police officers

The rally, which went on amid a heightened police presence at the Trocadero Square near the Eiffel Tower, was organized by Reporters without Borders, Amnesty International as well as other human rights groups and journalist unions. Opponents of the Global Security Bill insist that it’s a major infringement on the freedom of the press.

Activists carried banners decrying the law, chanted slogans, while also singing La Marseillaise, the French national anthem. Some in the crowd sported yellow vests, a symbol of the larger protest movement against economic injustice across France.

The rally was staged despite a national lockdown and a ban on public gatherings, in an attempt to stem a second wave of the coronavirus. Many demonstrators neglected social distancing rules and the government’s order to wear face masks.

The rally went on peacefully for hours, but tensions began rising after dark when some demonstrators started setting trash bins on fire. The protesters threw bottles and other objects at riot police, an RT France correspondent reported from the scene.

The police initially refrained from action, but then deployed a water cannon and to disperse the crowd.

Smaller protests against the law were also held in Marseille, Lille, Montpellier and other French cities on the day.

The Global Security Bill, which is pushed forward by the government of President Emmanuel Macron, among other things criminalizes the distribution of images of law enforcers by both the public and the media. A violation could carry a one-year prison sentence or a €45,000 fine.

The legislation got the greenlit from the National Assembly on Friday and is expected to be approved by the Senate next week.

In response to the criticism, Prime Minister, Jean Castex, assured that the bill “won’t impede the freedom of information,” but will only focus on images shared with “clear” intent to harm a police officer.

Also on rt.com French move to outlaw images of police at work is a clumsy attempt to hide the everyday brutality that passes as law enforcement


Videos of police using excessive force against demonstrators and criminal suspects have recently caused a vast public outcry in France. The most vivid incident was the death of Paris man, Cédric Chouviat, in January, which strongly resembled what happened to George Floyd in the US.

Chouviat, a 42-year-old father of five, was filmed shouting “I’m suffocating” as he was held down by seven officers. The probe into the case saw three officers charged with manslaughter.