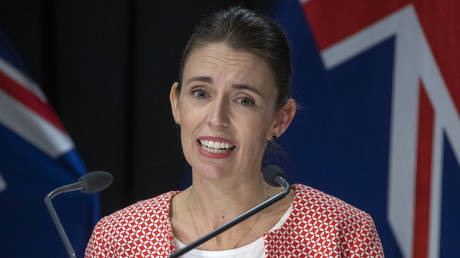 ‘Such is life,’ New Zealand PM Jacinda Ardern said as she announced the decision

New Zealand PM Jacinda Ardern has called off her wedding as the island nation is set to introduce the highest ‘red light’ restrictions in order to stem the spread of the super-mutant Omicron variant of Covid-19.

With the country about to tighten anti-coronavirus measures from 11.59pm on Sunday, its prime minister announced she had canceled her upcoming wedding celebration.

Ardern and her partner Clarke Gayford, who have a daughter together, were planning to officially tie the knot later in summer. New Zealand is in the southern hemisphere, meaning that its summer months are December, January and February.

Speaking at a regular Covid-19 briefing, she noted that the ‘red light’ status limited weddings, birthdays and other gatherings to 100 people for the vaccinated and to 25 people for the unvaccinated.

“As for mine, my wedding won’t be going ahead but I just join many other New Zealanders who have had an experience like that as a result of the pandemic. And to anyone caught up in that scenario, I am so sorry, but we are all so resilient and I know we understand we are doing this for one another and it will help us carry on,” Ardern said.

When asked about how she felt about the cancellation, the 41-year-old responded: “Such is life. I am no different to, dare I say, thousands of other New Zealanders.”

Apparently Ardern has no desire to follow in the footsteps of her British counterpart Boris Johnson, who currently faces calls to resign after allegations that he attended parties in violation of his own Covid-19 restrictions.

New Zealand, which cut itself off from the rest of the world during the Covid-19 pandemic and managed avoid a major spike in cases from the Delta strain, decided to move the ‘red light’ status after nine Omicron cases were discovered in the town of Motueka on the western shore of Tasman Bay.

All nine infections occurred in the same family, who had traveled to Auckland to attend a wedding, a funeral, and an amusement park last weekend.

The more contagious Omicron variant is currently circulating in Auckland and possibly the Nelson area, Ardern said, refusing to rule out that it may have spread further into the country.

Previous Posts Do You Know How Weather Affects Skin? Refer To This Article
Next Posts US bomb fragment found in rubble of Yemen airstrike – reports