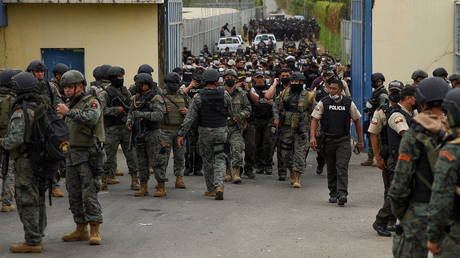 The death toll from a massive riot that turned into a massacre at a large prison in Ecuador has risen to 68, according to the authorities. The deadly violence was reportedly sparked by a gang rivalry.

The riot broke out on Friday night at the Litoral Penitentiary – a large prison near the town of Guayaquil. The prison is known to house inmates from the infamous Los Choneros gang that allegedly has links to Mexico’s powerful Sinaloa cartel.

The violent clashes were sparked by a conflict between members of different gangs incarcerated in the facility. The prison’s Second Ward, housing around 700 inmates, has become the epicenter of the bloody chaos.

Unverified videos circulating on the internet that were allegedly recorded by inmates themselves show what appears to be aftermath of the massacre. Footage shows gang members attempting to burn the bodies of their rivals right in the prison court. The bodies, lying in pools of blood, were put together with some debris and set on fire. Some inmates were seen walking among the dead and still hitting them with large sticks.

The police only entered the facility on Saturday morning. The officers could not do this sooner, Ecuadorian police chief Tanya Varela said during the press conference, adding that any rushed actions would only have made the situation worse. The officers found guns and a dozen sticks of dynamite as they were searched the facility while guarded by a tactical commando unit, according to the media reports.

The Litoral Penitentiary had already witnessed another massive riot in late September that ended with the deaths of 119 inmates.