Putting skin & sex before qualifications is destroying US – Tulsi Gabbard 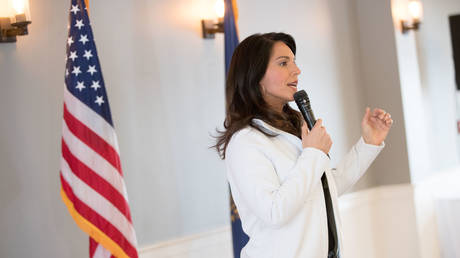 Former Hawaii representative Tulsi Gabbard ripped President Joe Biden’s promise to pick a black woman as his next candidate for the US Supreme Court. Biden took the same identitarian approach to select his running mate, and Kamala Harris turned out to be a disaster, she claimed.

“Identity politics is destroying our country,” the former Democratic presidential candidate said in a tweet.

That’s after Biden had pledged on his campaign trail to fill in the first vacancy in the Supreme Court with a woman of color. The announced retirement of 83-year-old Justice Stephen Breyer opened an opportunity for the president to fulfill that promise, and the White House confirmed his intention to do so.

Biden chose Harris as his VP because of the color of her skin and sex—not qualification. She’s been a disaster. Now he promises to choose Supreme Court nominee on the same criteria. Identity politics is destroying our country.

The idea, however, doesn’t sit well with voters, according to an ABC News/Ipsos poll, which found that 76% of Americans would rather have Biden consider all possible nominees rather than limit the pool of candidates based on gender and race.

There was also considerable backlash from conservatives, who said Biden’s proposed approach to picking the right person for one of the most powerful jobs in the country clearly went against the principles of meritocracy. The White House said it was not different from Ronald Reagan’s promise to nominate a woman for SCOTUS. The Republican fulfilled it with the candidacy of Sandra Day O’Connor, the first ever woman to join the top US Court.

Some critics made this point worse than others. Ilya Shapiro, a libertarian constitutional law scholar, was suspended by Georgetown Law School before he could start his new job as the executive director, after making a poorly-worded remark about his preferred candidate.

The best pick to replace Breyer would be Sri Srinivasan, who would also check the identity checkbox courtesy of being an Asian American, Shapiro argued. But because of the “latest intersectionality hierarchy … we’ll get lesser black woman,” he tweeted last week. The scholar apologized for the remark, which outraged liberals and the black community on the campus, and put his hopes on a fair investigation by the university.

Meanwhile some GOP politicians seized the opportunity to launch barbs at the Biden administration over the reported rift between him and his vice president. Senator Ted Cruz suggested that Biden could nominate Harris to the Supreme Court just to kick her out of the executive branch. Harris was not mentioned on the list of potential candidates released by the White House.

Previous Posts Omicron COVID-19 Symptoms Could Get Worse Due To Overexertion: Know Details Here
Next Posts Vaccination against deadly disease at 10-year-low in children