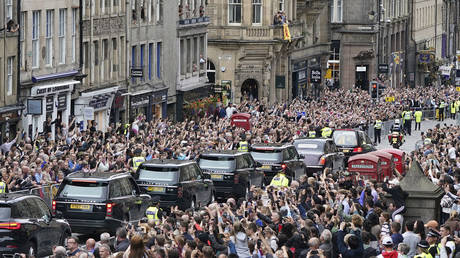 Quoted by the Evening Standard on Wednesday, Byford explained that as “millions” of people are set to converge on central London streets in the coming days, TfL is now using “every possible resource” to run services smoothly.

“I’m going to say it’s bigger than the Olympics – it’s the Olympics but with so many potential unknowns,” he said.

Preparations for the 2012 London Olympics are considered one of the most challenging tasks in the country’s history in terms of transport, logistics and security. The total cost of the Games went over budget by 76% in real terms and amounted to $15 billion, according to an Oxford University study.

By calling the memorial events “the biggest challenge that TfL has ever faced,” Byford echoed recent remarks by Bob Broadhurst, the former head of public order at the Metropolitan police who was overseeing security at the Olympics. Broadhurst, quoted by the Guardian, explained that the fact that the “royal family wants to be seen and wants to be close to their public” makes preparations even more complicated.

With hundreds of thousands of people preparing to queue for up to 30 hours to see the late monarch’s coffin in Westminster Hall ahead of her funeral on Monday, the Cabinet Office has not ruled out that London could be pronounced “full” for the first time in its history, in which case travelers would be advised against visiting the capital.

As part of a large-scale security and logistical operation, hundreds of heads of state and members of royal families from around the world attending the state funeral have been asked not to take private cars to the event.

According to The Times, an exception would be made for US President Joe Biden: he will be able to travel through London in his armored car.

Previous Posts Benefits Of Soaking Lentils Before Cooking, As Per Expert
Next Posts Biden’s inaction has ensured North Korea’s nuclearization