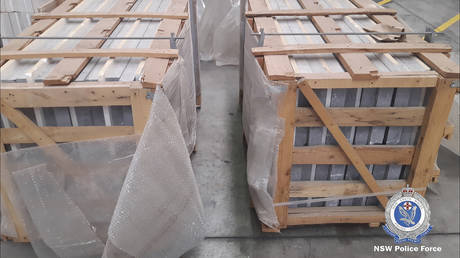 Australian police announced the country’s largest-ever seizure of methamphetamine, worth more than AU$1.6 billion (some US$1.1 billion) on Friday. Nearly two metric tons of the drug were concealed inside marble slabs shipped into the continent from the Middle East.

The first part of the haul, some 748 kilograms of the drug, was discovered by Australian Border Force (ABF) officers in Port Botany, a southeastern suburb of Sydney, early this month. The discovery led to the arrest of three suspects, the police said.

During investigation, AFB examined an additional number of containers that arrived in Port Botany last week, discovering another haul of marble tiles. The consignment was deconstructed and turned out to contain additional 1060 kilograms of meth, bringing the total amount seized to some 1.8 metric tons. So far, no charges have been brought or arrests made in connection with the new discovery, the police noted.

All the containers with meth-filled marble tiles have been destined for a factory in western Sydney, apparently set up to quickly extract the drug from the slabs, Watson revealed. The police have not determined how often the factory had been used, he added.

“Combined with the seizure from earlier this month, NSW Police and ABF officers have stopped more than 1.8 tonnes of ‘ice’ at the border – this is now the largest ‘ice’ bust in Australian history,” Watson said in a separate statement.

The previous record meth haul was 1.6 metric tons and was seized in Melbourne in 2019. Back then, the drug was found hidden inside speakers shipped into the country from Thailand.