Russia can declare victory ‘whenever it wants’ – Budapest 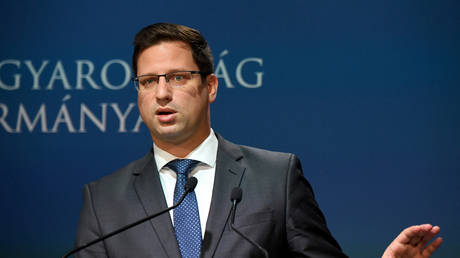 Gergely Gulyas, the minister in charge of PM Viktor Orban’s office, says that Moscow has a major advantage over Kiev

Given Russia’s clear upper hand in Ukraine, the Kremlin can define what constitutes victory and declare that it has been achieved whenever it sees fit, a Hungarian minister has claimed.

On Friday, Gergely Gulyas, the minister in charge of the Hungarian Prime Minister’s Office, shared his view of the conflict in Ukraine at a roundtable discussion at the University of Public Service in Budapest, which was held to promote a new book titled ‘Russian Great Power Policy 1905-2021.’

The official said that Ukraine and Russia have both found themselves in a situation that they are having a hard time getting out of. He added that the “chances of peace” right now are “poor” – though Moscow “has such an advantage” in the conflict that it could define what would constitute victory and declare it “almost at any time.”

He went on to warn against any direct involvement by NATO, adding that the EU sanctions on Russia have so far backfired, hurting the bloc more than the intended target. Gulyas noted that the Western restrictions have “brought incredible income” for Moscow so far. Furthermore, the EU’s policies, he believes, could result in Russia drifting further away from Europe while becoming closer with Asia.

While Budapest joins the US in condemning Russia’s military operation in Ukraine, this does not mean that Hungary is prepared to impose similar sanctions on Moscow, as this would go against the country’s own national interests, the minister noted.

On the topic of Ukraine, Gulyas accused Kiev of failing to protect the basic rights of ethnic minorities, particularly Hungarians.

In 2017, the Ukrainian government adopted a law aimed at removing minority languages from Ukrainian schools, which Budapest sees as discriminatory.

Kiev has long accused its Western neighbor of fanning secessionism among Ukraine’s Hungarian diaspora, including by allegedly secretly granting citizenship to ethnic Hungarians.

Previous Posts 5 Signs Your Hair Is Lacking Vitamins, As Per Dietician
Next Posts Biden admits he lied