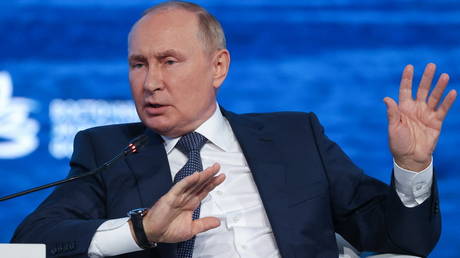 Russia will not introduce any visa restrictions on foreign citizens in retaliation for similar measures imposed by the EU, President Vladimir Putin said on Wednesday.

Speaking at the Eastern Economic Forum in Vladivostok, the Russian leader made it clear that Moscow would not allow anybody to impose their will on the country, signaling that Russia intends to act only in its own interests. This means that Russia will not slap any visa restrictions on foreign citizens, he said.

“[Russian Foreign Minister] Sergey Lavrov will probably get angry with me, because the Foreign Ministry acts in a tit-for-tat way: if we get spat on, we spit in response,” he stated, referring to the EU’s decision to suspend a visa deal with Russia over the ongoing Ukraine conflict.

“There is no need to do anything that does not meet our interests,” Putin added.

The Russian president said that Moscow would be happy to see foreign students and businesspeople visit the country. “There are a lot of businessmen who love and trust Russia, and want to work here. Welcome,” he added, with the last word being said in English.

“Let them come and work. Why should we impose restrictions on them? There’s nothing wrong with it,” he stated, adding that those who sever ties with Moscow isolate not Russia, but themselves.

On Tuesday, Putin also said he would order the Foreign Ministry to assess the possibility of establishing a visa-free regime for foreign tourists, even if such a step is not reciprocated.

The Russian president’s comments come after the EU approved on Tuesday a proposal to suspend an agreement with Moscow that had allowed Russian citizens to apply for visas under simplified procedures. The move means that Russians will have to pay larger fees and endure longer processing times to travel to the EU.

Although the bloc as a whole did not announce a full visa ban, several individual member states, including Poland, the Czech Republic, Estonia, and Latvia, have stopped issuing visas to Russian citizens.